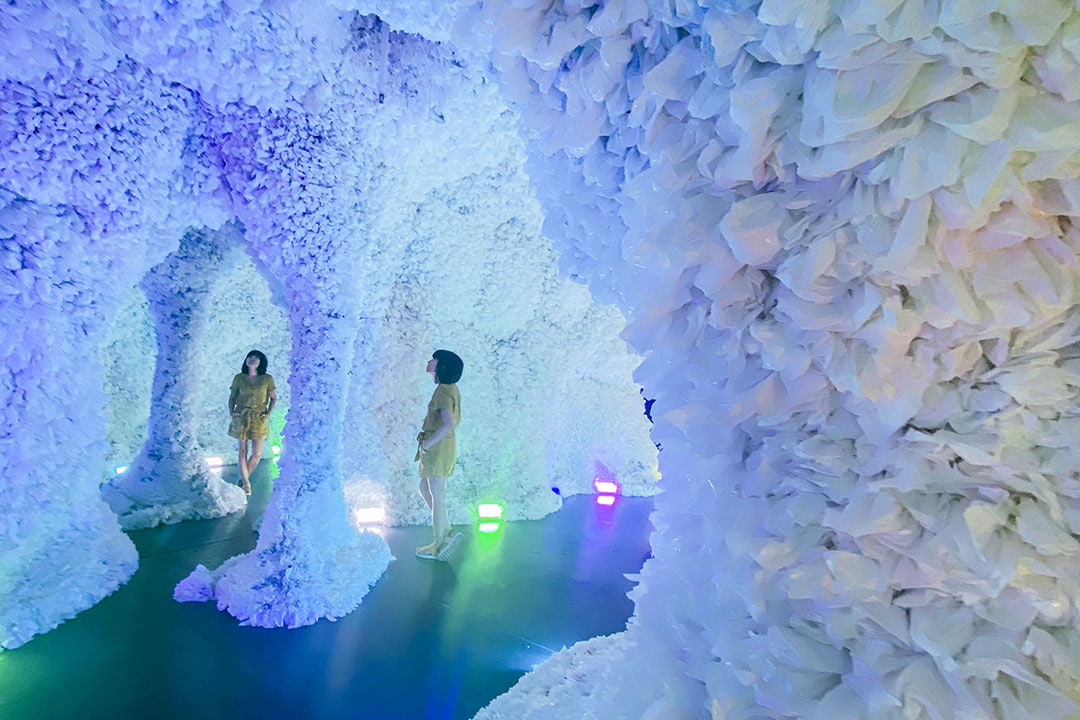 Looking for the best museums in Las Vegas? Here’s a complete guide filled with local tips.

When you hear Las Vegas, you aren’t thinking museums, but Sin City has changed since the Hangover days. Our uber driver even complained to us about the changes and how he’s seeing tons of family travel now. It’s true. As the city continues to grow, so does the diversity of attractions. Museums are among them.

We’ll be the first to admit that we’re not museum people. Sure, we visited the Met in NYC because, well… it’s the Met. But, generally, history and art don’t move us like natural landscapes. Every so often, though, there are exhibits that even intrigue us uncultured folk.

If we only had time for one museum in Las Vegas, we would highly recommend the Mob Museum, but our top 3 include the Mob Museum, Meow Wolf, and National Atomic Testing Museum.

In the News – In March 2023, the Punk Rock Museum will open near the Arts District.

The Mob Museum is our favorite museum in Las Vegas. It is located in what used to be a federal courthouse and post office, and they include fun interactive exhibits. The museum takes you through the fascinating history of organized crime from the beginning to the present day. It has a nice flow and tells stories from both sides, law enforcement vs. the Mob.

To top it off, there is a speakeasy in the basement where you can enjoy creative drinks and taste liquor distilled right there.

Local Tip: There is a secret door to the speakeasy on the backside of the building near the parking lot. Find the password on their Instagram stories.

We never knew Nevada played a huge role in atomic bombs. You can learn all about it at the National Atomic Testing Museum. This museum is an affiliate partner of the Smithsonian Institution, one of only 27 national museums in the nation.

The museum is 8,000 square feet and has some of the rarest artifacts related to the US atomic testing program. Some of the highlights include an original bombshell built for the Trinity gadget, the largest collection of survey meters, and a piece of the Berlin Wall.

You’ve probably seen photos of the Neon Museum on Instagram. It is home to old vintage neon signs, so it’s also known as the Neon Boneyard, where neon signs go to die OR have a second life. The museum focuses on collecting, preserving, studying, and exhibiting iconic Las Vegas signs, and it’s cool to see all of them in one spot. It is a dying art, after all.

There are different types of tours depending on what you want to do. Just be sure you read all the rules to see what you’re allowed to do!

Local Tip: Photography rules are very strict here. You can shoot with your phone, but if you want to shoot with anything beyond that, you need a special ticket.

Springs Preserve covers 180 acres filled with nature walks, exhibits, and attractions for the whole family. We love exploring the botanical gardens and wildlife exhibits. You can also check out the art gallery, educational exhibits about Vegas’ rich history, theater, bike rentals, and more.

Local Tip: Since the majority is outdoors, avoid visiting in the summer when it’s blistering hot out.

Meow Wolf’s Omega Mart is hard to explain, but imagine a trippy supermarket that leads you to an even trippier immersive world behind the big corporation. Through art, this fully immersive experience is nothing like we’ve ever seen before. I don’t want to spoil too much, but if you want to get more tips on how to make the most of your visit, check out our blog post and IG reel.

Local Tip: When you arrive, find an employee to get a Boop card to follow the storyline.

The Bellagio Gallery of Fine Art rotates exhibits each year, and they are currently showing Caldonia: Concert and Film Posters from the Ralph DeLuca Collection.

See Related – 101 Things to Do in Las Vegas Bucket List

Of all the places on this list, we go to the Bellagio Conservatory the most since they change their entire exhibit each season. The Bellagio has 120 gardeners that work in this space, not to mention the additional designers, engineers, electricians, and more. Plus, certain exhibits look different during the day and at night, so sometimes it’s worth visiting twice.

Local Tip: Between seasons, there are 5-6 dark days when the conservatory is shut down for the changeover.

The Illuminarium is one of the newest attractions in AREA15. It is an immersive experience that brings tech, music, and visuals together. Various shows are currently running, including Space: An Experience Beyond Earth, Wild: A Safari Experience, and O’Keeffe’s One Hundred Flowers.

For an extra special experience, check out the after-dark exhibits where you can sip on cocktails during your time there.

Local Tip: They also have a cafe on site, and they have good food. Not many attractions put their energy and focus on food, but this one does.

If regular museums are too boring for you, visit the Pinball Hall of Fame, which is basically a giant arcade filled with pinball machines from the 50s to the 90s. They moved to a new location closer to the Strip recently with a massive sign that you can’t miss. Plus, all the proceeds go to charity!

Local Tip: Bring cash or use their ATM, but you’ll have an extra charge.

The Las Vegas Natural History Museum has nine galleries covering everything from prehistoric life to wildlife from all over the world. They have rotating exhibits on loan from other museums and even do shark feedings (check their site for the latest shark feeding schedule).

Near. Far. Wherever You Are. Recreate some of your favorite Titanic moments and learn more about the most famous ship/shipwreck of all time at Titanic: The Artifact Exhibition. There are 350-400 authentic artifacts recovered from the wreck site, recreations of some of the ship, and so many stories to read about the guests aboard. They also have one of the largest artifacts with an entire ship panel.

Local Tip: If you want to bring home a piece of the Titanic, there are souvenirs in the shop with a small piece of coal recovered from the shipwreck.

Arcadia Earth is an immersive experience that engages all your senses to inform, inspire, and activate you to positively make a change for our planet. When arriving, you download their app, which uses augmented reality elements you can interact with. The photo below was in a cave made out of salvaged plastic bags. By the time you go through the room, that’s how many plastic bags become trash. What a powerful visual.

The artists beautifully create different environments, and they have a lot of practical calls to action.

Local Tip: Locals can save money by parking at Park MGM and walking over. You receive 3 hrs free with a local ID.

Meet some of your favorite celebrities, or at least their wax counterparts, at Madame Tussauds. I’m curious if face ID would work on their phones. Some figures were more realistic than others.

We haven’t visited Zak Bagans’ Haunted Museum yet since I’m a baby when it comes to the paranormal. I’ll have nightmares for months. The museum is located on a property that is rumored to be haunted. When inside, you explore winding hallways and secret passages that take you to the 30+ rooms that house paranormal pieces, including the Dybbuk Box, the world’s most haunted object. I may have to send Jacob and another friend to this one.

Learn more about the human body through these unique and dramatic displays of the human anatomy. There are over 20 real, perfectly preserved human bodies and 200+ anatomical specimens. It’s part science, part art, and definitely will get you appreciating how everything in our bodies works together.

Local Tip: There are also art installations from local Las Vegas artists inside.

The Museum of Dream Space, or MODS for short, is the first in the US. It primarily features digital art, which makes it partly an immersive art experience and partly a place to get fun photo opps.

There are five different rooms, including one done by Pretty Done, whose art is all over Las Vegas.

Local Tip: Cameras are allowed, but no professional equipment like a tripod and lighting.

Map of the Best Museums in Las Vegas

Did we miss any? Let us know in the comments below.

What exhibitions are on in Las Vegas?

There are a handful of exhibitions currently in Las Vegas that you can check out here.

What is the craziest thing to do in Vegas?

The craziest thing… would be getting married on a whim. But if we’re talking about museums, Omega Mart is unreal.

Which bodies exhibit is better in Vegas?

We’ve only been to Real Bodies at Bally’s, but from what we hear, it is the better one with more specimens, info, and art than Bodies the Exhibition. Plus, it cost less.

Do you have to pay to go to Omega Mart?

Yes! Find all the details and how to make the most of your trip here.

How many museums are in Nevada?

There are seven state museums in Nevada and over 90 museums covering a wide range of topics.

Why doesn’t Las Vegas have a zoo?

When many of the major and accredited zoos were opening all over the US, Las Vegas wasn’t considered a major city. Since then, the city has changed, attracting more families. The Las Vegas Zoological Society is in the early stages of developing a legitimate zoo, but we shall see.

When should you not go to Las Vegas? What is the best month to visit Vegas?

Avoid the summer. It’s hot. Our favorite months are March-April and October-November. If you can only visit during summer break, June is your best bet, but be prepared for over 100-degree days.

Can you carry a backpack in Las Vegas?

Yes, although some museums/exhibits do not allow bags (as well as some shows). Be sure to check the fine print.

What is the #1 museum in the world?

The Met, according to Tripadvisor.

Which city has the best museums in the US?

DC tops the list, with NYC second and Chicago third.

What’s the biggest museum in the USA?

The Met in NYC.

What museum has the most expensive collection?

The Getty Center in Malibu.

DID YOU ENJOY THIS POST? PIN IT FOR LATER