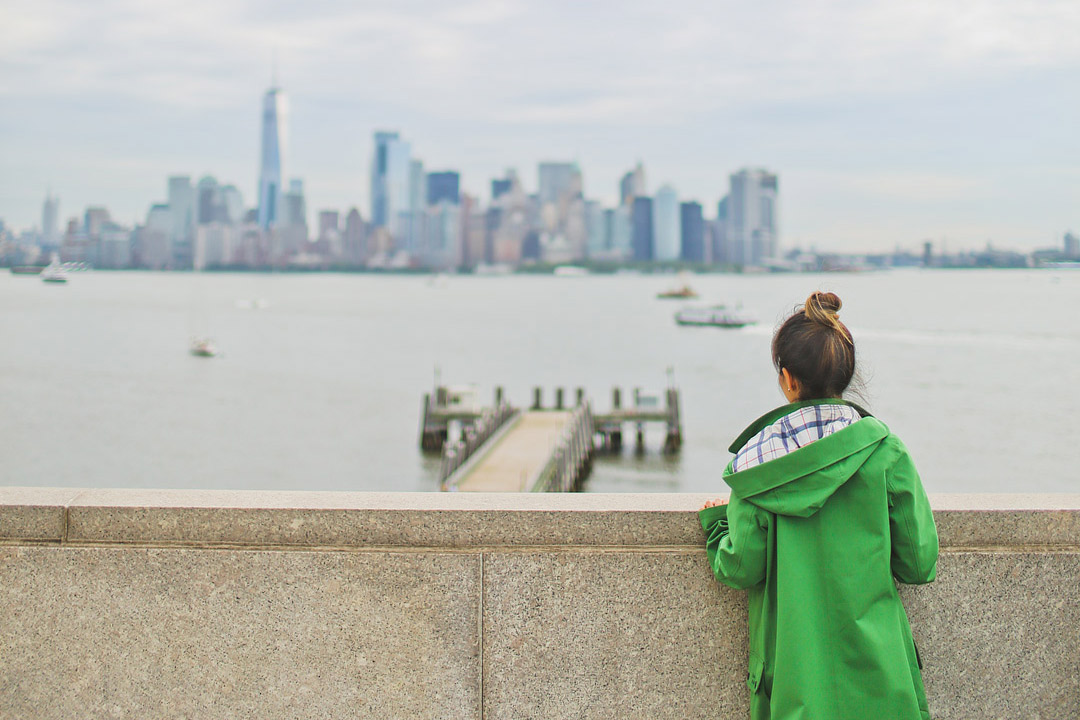 It’s no secret that we love the National Parks. Ever since we started exploring them together, we decided that we wanted to visit every single one. Since we’re local adventurers, that means all the National Parks in NYC too!

What’s that? There are National Parks in New York City? A big thank you to Nature Valley for sponsoring this post and supporting the National Park Foundation. All opinions are always our own. Thank you for supporting the brands that make Local Adventurer possible.

We’re always looking for ways we can share more about the parks and support them any way we can, so we’re excited to partner with Nature Valley to get the word out about the Summer of a Million Miles Challenge! We’ll get into more detail below on how to join in to raise funding for the National Park Foundation, the official charitable parter of the National Park Service. There’s even a chance to win a trip to a National Park!

This gave us another reason to explore the national parks in NYC! There are 11 parks with 23 different sites to see.

11 NATIONAL PARKS IN NEW YORK CITY FOR YOU TO EXPLORE

This is where NYC began. It was initially built to prevent a British invasion in 1812, but now welcomes millions of visitors to New York Harbor. It is the ticket office for Statue Cruises, so is constantly filled with visitors waiting to see the Statue of Liberty and Ellis Island, but also has its own exhibits and Junior Ranger program. Be sure to make time to spend some time here.

Pro Tip: Since its the gateway to the Statue of Liberty, it gets extremely crowded! If you want to visit before the crowds, arrive right when they open. You can also see Ellis Island and the Statue of Liberty from here – just walk down to the water (there’s a photo of Jacob from here with his backpack later in the post)! George Washington took the oath of office as our first president here on Wall Street. It was where the first Congress, Supreme Court, and Executive Branch offices were. The current building later because part of the US Sub-Treasury, and is now home to a museum and memorial to Washington and the start of the USA.

We had walked by multiple times over the past few months and it’s always crowded outside. Tons of people stop here and the neighboring NYSE to take photos, but since we were on a mission to visit all the sites, we fought through the crowds and headed inside. To our surprise, the inside was really empty! We were able to enjoy the exhibits and get out of the heat and crowds. Address: 210 New York Avenue Staten Island, NY 10305
Fee: No Fee, Some sites do have seasonal parking fees not covered by the American the Beautiful Pass
Hours: Varies Per Site

If you’re not sure where to start, stop by one of the Visitor Centers:

Get a look into the history of the Lower East Side and the immigrants who lived here from 1863 to 1935. There are multiple tours that cover everything from Neighborhood Walking Tours to Tenement Tours, but regardless of what you’re doing, you’ll quickly learn that each tour is focused on stories. They will tell you about a particular family on each tour and how their lives were in the space.

We did the Sweatshop Tour. During the visit, we were able to see an apartment in the condition as it was found with the layers and layers of wallpaper and artifacts from the excavation then headed to an apartment that was restored to what it looked like when they were living in it.

Note: This site is loosely affiliated with the NPS. Your America the Beautiful Pass doesn’t include the tours and there aren’t Rangers here. You can still get a stamp for your passbook, just ask for the stamp at the cashier. There is no photography allowed and backpacks are not allowed on the tour. There are lockers on site that cost a quarter. This is the largest mausoleum in North America and the final resting place of President Ulysses S. Grant and his wife. It truly shows the nations gratitude to the man who ended the bloodiest conflict in American history and his efforts to heal a nation after a civil war.

Pro Tip: West of the National Memorial, stop by the Overlook Pavilion Visitor Center to explore the museum and get views of the Hudson River.

This 172-acre island comes alive in the summer with art, culture, and performances. Within the island lies 22 acres containing the National Monument made up of Fort Jay, Castle Williams, and Dock 102 that was home tot he U.S. Army from 1794 to 1966.

The Statue of Liberty is one of the most recognized landmarks in the world and a universal symbol of freedom and democracy. When visiting, you can buy a standard ferry ticket that gives you access to Liberty Island and the grounds surrounding the statue, a Pedestal ticket that allows you to see the museum inside and climb to the top of the pedestal (the stone portion of the statue), or a Crown access ticket, that let’s you climb all the way to the crown of the statue.

We did the Pedestal access ticket and got on the very first ferry from NYC (they also have ferries from NJ). If you come from the NYC side, the ferry goes to Liberty Island first, then to Ellis Island. Since we were the first ones out there, we could get amazing shots as we approached the island with no crowds there. By the time we left, there were people all over the pedestal and grounds around the statue. Afterward, we headed over to Ellis Island to get a glimpse of the space where 12 million immigrants passed through to enter this country from 1892 to 1954. We kind of wished our family had more history in America because going through the Ellis Island Immigration Museum would be walking the footsteps of our ancestors.

Pro-Tip: The climb up to the Statue of Liberty pedestal is no joke! We’re decently fit, but the 215 steps definitely gave us a workout. If you’re continuing to the crown, it’s an additional 162 steps through a very narrow stairway. We heard that some people can’t finish because they get claustrophobic. The Stonewall Uprising on June 28, 1969 is a huge milestone in the LGBT civil rights movement. Up until the 1960s, living openly as a lesbian, gay, bisexual, or transgender was illegal, and NYC laws were particularly harsh. This is a brand new National Park unit so there isn’t a Visitor Center yet, but you can get more information at Castle Clinton and online before visiting the site. It encompasses Stonewall Inn, Christopher Park, and a few blocks around it (see map).

Since we went during pride month, it was decorated with flags and colorful flowers. Visit the boyhood home of our 26th President, Theodore Roosevelt. During your visit, you can watch a 5-minute introductory film, check the exhibit gallery containing artifacts and historical info, or go on a guided tour of the five restored period rooms. Don’t forget to become a Junior Ranger too!

I’ll admit that I knew very little about Alexander Hamilton until we saw the musical, Hamilton. From humble beginnings, he grew to become George Washington’s right-hand man, and eventually helped shape and build the tools to help our new country succeed. You can learn more about him at this country home he built in Harlem through films, exhibits, and guided tours.

This is the oldest and largest known excavated burial ground in North America for both free and enslaved Africans. There is a visitor center where you can explore exhibits and learn about the historic role slavery played in building NYC. The memorial honors all those buried here. Did you have any idea that there were so many National Park Units in the city? No matter where you live, see what National Parks are near you. If you can’t get to one, no worries! Get out and explore any place you’d like and join the challenge to support the parks.

HOW YOU CAN SUPPORT THE NATIONAL PARKS

To be a part of the Nature Valley’s Summer of a Million Miles Challenge, follow these simple steps:

*UPDATE* As a result of the active wildfire season to date, Nature Valley has made the decision to immediately commit the $250,000 donation to the National Park Foundation’s Disaster Relief Fund. This will allow the NPF to distribute funds as needed to parks affected by disasters like wildfires. We encourage you to continue logging your walks, runs, and hikes to see how many more miles we can log this summer. And don’t forget, you can unlock awesome prizes by logging your hikes! Now here are more ideas of places you can go to track your steps, but really it can even be walking through your city too. Besides the spots above, we also tracked our steps walking through the city and at Central Park.

No matter where your hikes take you, be prepared with the right gear, water, and always have snacks on hand. Nature Valley granola bars are the perfect way to keep you fueled on your next adventure! Check out our packing guide below for details on what you should pack wherever you head. And don’t forget to tag your photos with #NatureValleyHikeAMillion.

See all the best hotel deals and reviews here. SEE MORE THINGS TO DO IN NYC

TOP FUN THINGS TO DO INDOORS IN NEW YORK CITY

THE DEFINITIVE GUIDE TO THE BEST NYC ESCAPE ROOMS

21 THINGS YOU SHOULD KNOW BEFORE VISITING NYC

TIPS AND TRICKS FOR THE BEST BROADWAY SHOWS