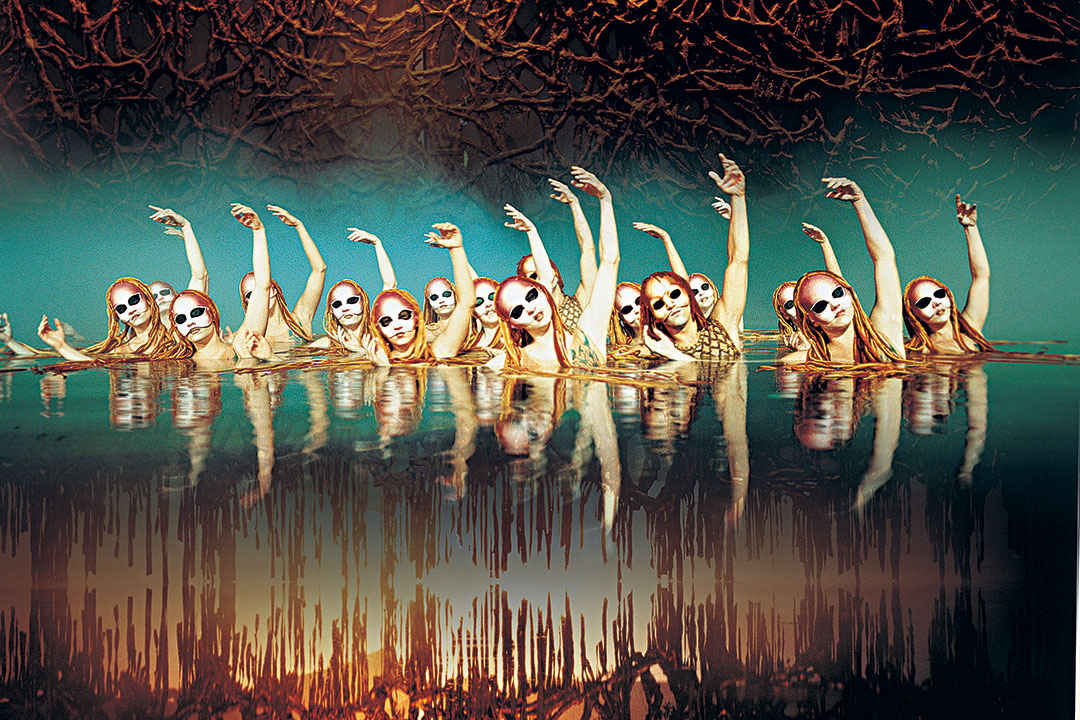 If you’re visiting Vegas, you should absolutely make time to see a show. We always did as visitors, and as a local, we still try to check out what’s new at least once a month. Since there’s a constant flow of big names coming through town and a variety of entertainment that has made Vegas a home base for years, it’s easy to find a fun new show even if you’ve seen tons of them like us.

Since there are so many different types of shows, to keep them organized, here are our top 9 Las Vegas shows so far. Then below that, we have complete lists for each category.

Note: Shows are not currently running due to the pandemic. Once they restart, we’ll update this post with new information. 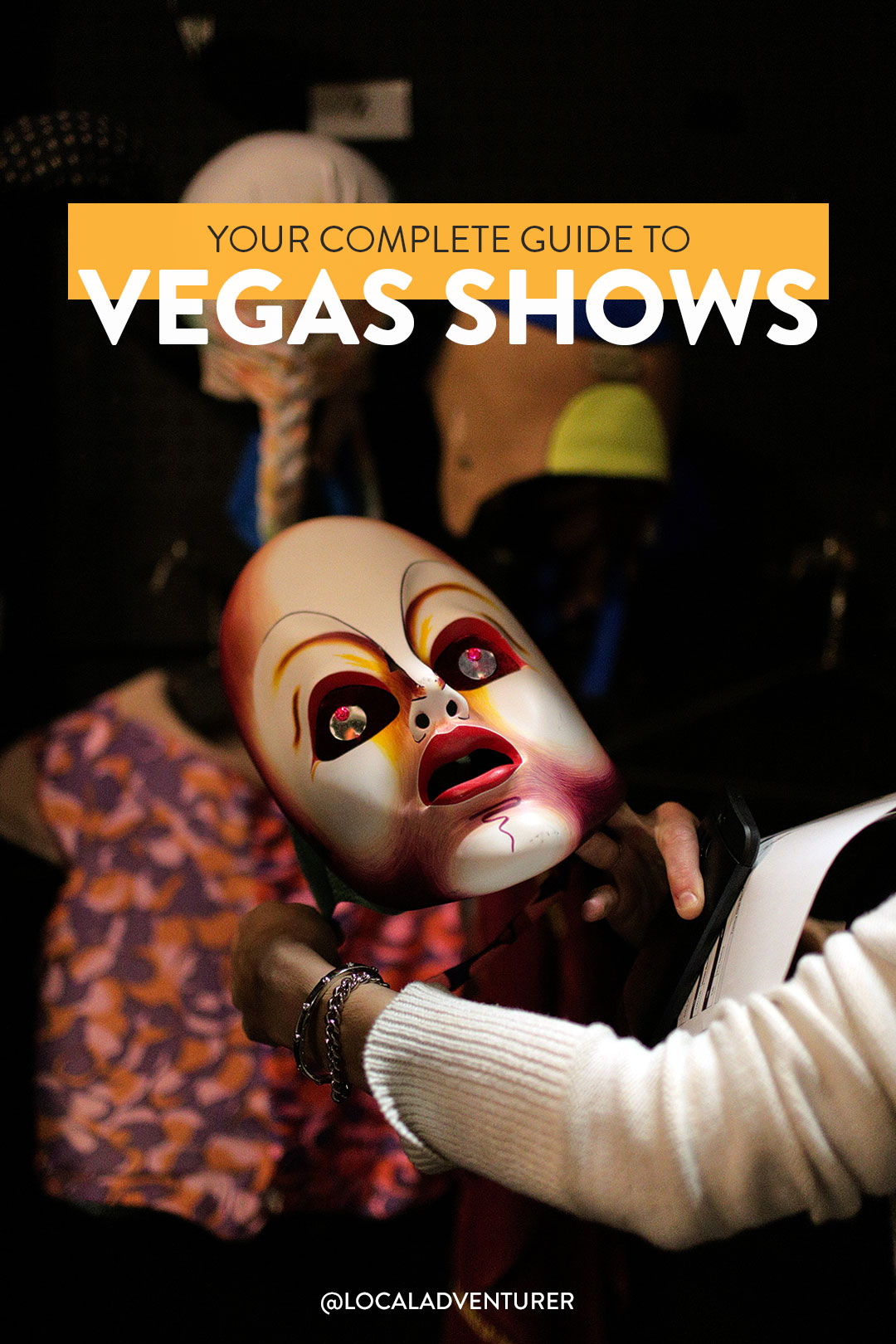 Your Complete Guide to the Best Las Vegas Shows

We’re making our way through as many shows as possible, and so far here’s a list of our favorites. Check back to see our newest reviews and tips on how to get the best prices on tickets.

If it’s your first time and you were to only see one show in Vegas, Cirque du Soleil is the way to go. The production quality and talent never fail to amaze us. We’ve seen all the Cirque shows and some even multiple times. Below, we have ranked them from our favorite to least favorite.

Michael Jackson ONE at Mandalay Bay

The Beatles LOVE, The Mirage

Pro Tip: Even if you’ve seen a traveling Cirque show, you should absolutely check out the ones in Vegas. They can do so much more with the stage when it’s permanent.

Synopsis: Blue Man Group will rock your world, blow your mind, and unleash your spirit. Leave your expectations at the door and let three bald and blue men take you on a spectacular journey bursting with music, laughter and surprises.

Our Thoughts: We’ve seen Blue Man Group a few times, and it’s always a good time. It’s a great show because it crosses language barriers and gets the audience involved.

Pro Tip: If you’re looking for photo ops, do the meet and greet or behind the scenes tour where you get to test out some of their instruments. They also stay in character which makes it fun for (and scary for me since I’ve never had a blue man stare so intently into my eyes).

More: Behind the Scenes at Blue Man Group Las Vegas 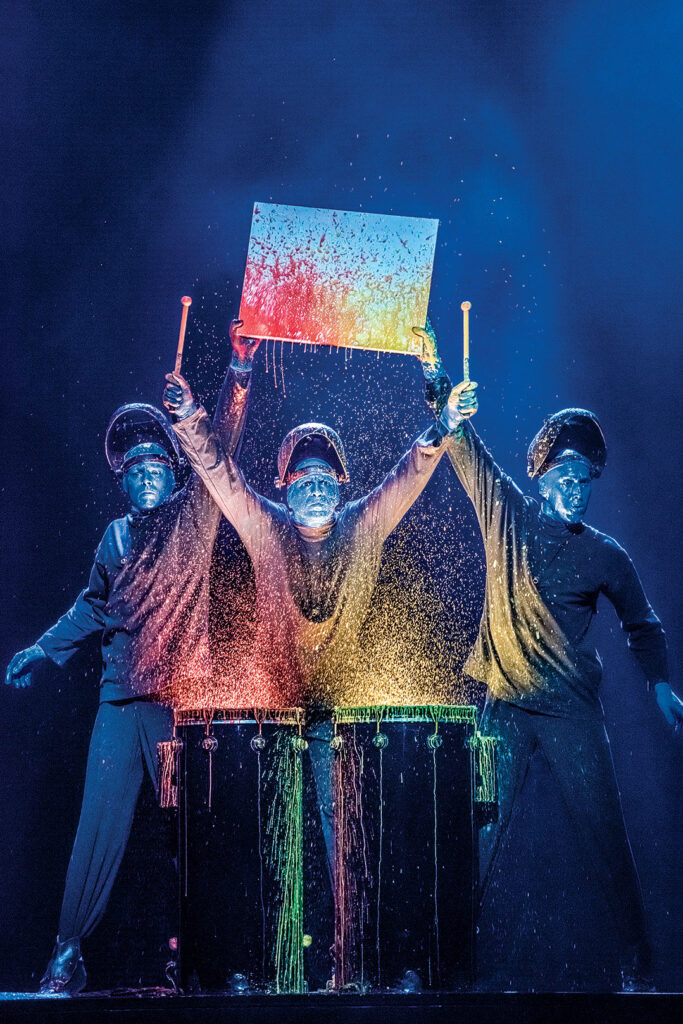 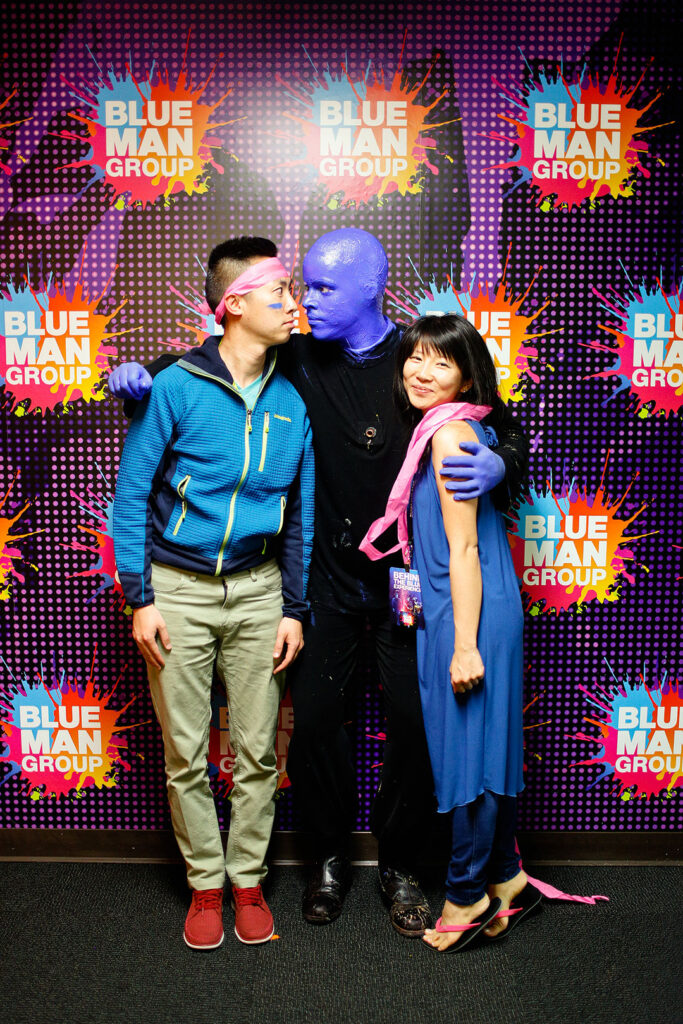 Synopsis: Hosted by the filthy rich (and just plain filthy) Gazillionaire and inspired by the absinthe-drenched cabarets of late 19th century Europe, Absinthe is an intoxicating cocktail of circus, burlesque and vaudeville for a 21st century audience. “Imagine Cirque du Soleil as channeled through The Rocky Horror Picture Show,” said The New York Times. Absinthe is for ages 18 and above.

Our Thoughts: This variety show is a lot of fun. They do a great job of mixing in humor with jaw-dropping skills and talent. We found ourselves laughing the entire time.

Pro Tip: If you’ve already seen Absinthe, Speigelworld also put together Opium at the Cosmopolitan and the Atomic Saloon Show at the Grand Canal Shoppes. 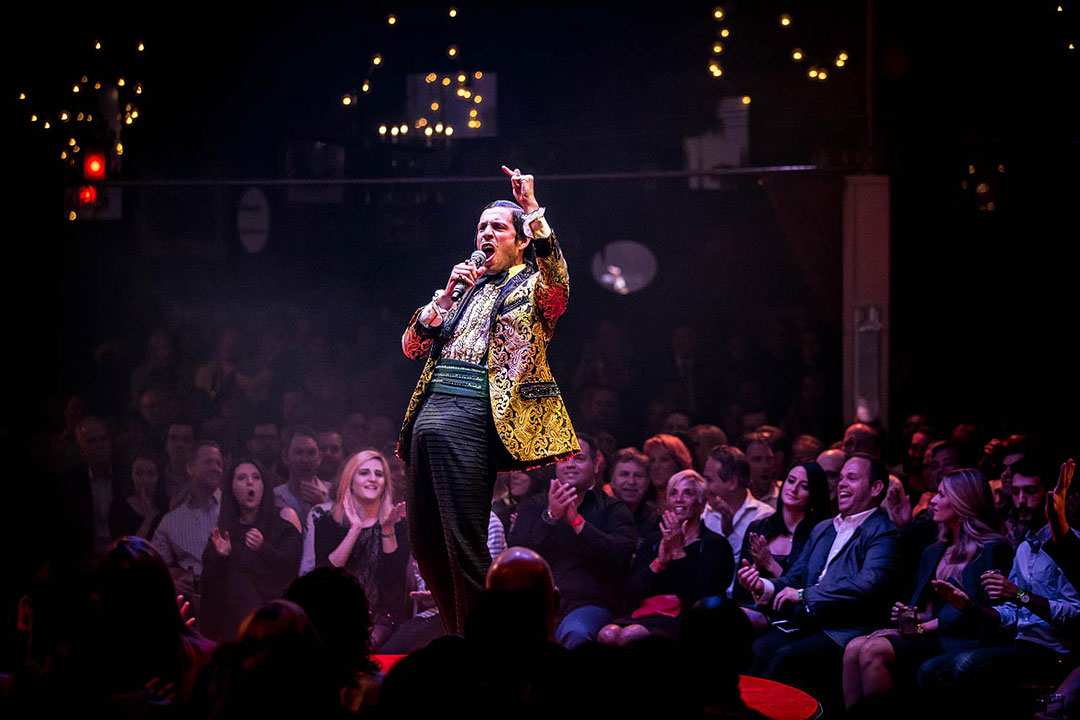 Our Thoughts: That’s no typo. He does 50 illusions in 70 minutes. We don’t typically watch many magic shows, and the few we’ve seen were frankly painful to watch. Going into the show, we didn’t know what to expect, but we ended up enjoying it so much that we want to see more magic shows. The show was the perfect amount of cheesiness, and the illusions were mind blowing. We spent the first half the show trying to figure out the the tricks and distractions, but they were happening so fast. Midway, we had to give up and enjoy the show.

Pro Tip: Go for a booth seat if you’re shorter. They are higher up than the regular tables. Or you can just hope a tall person doesn’t sit in front of you. 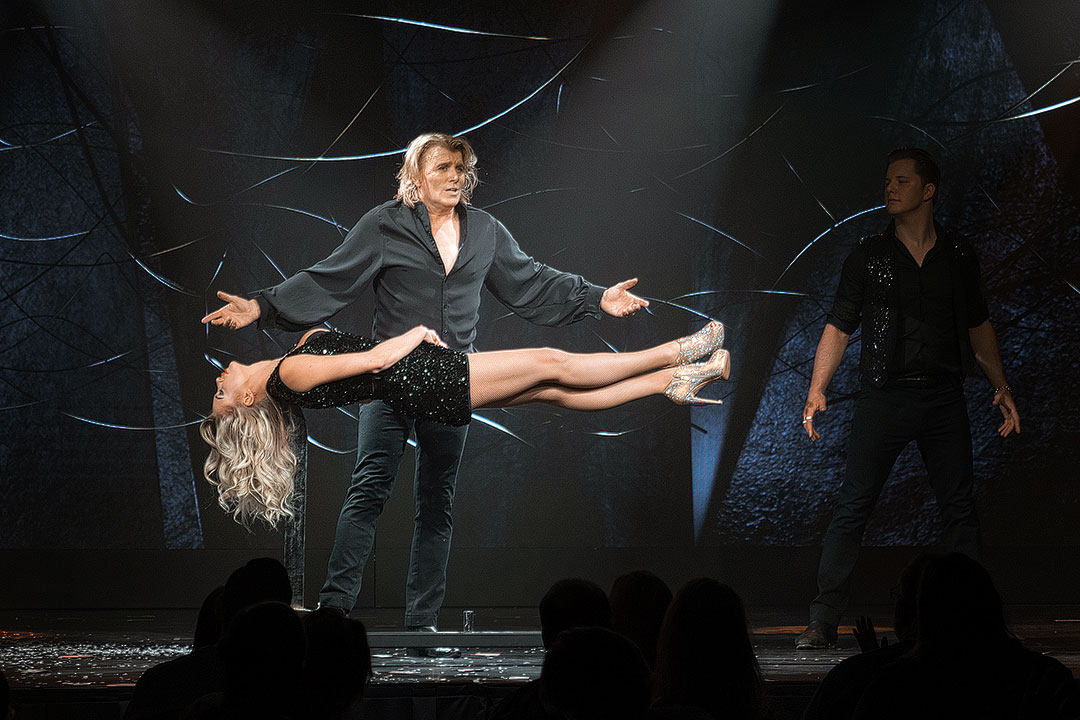 Our Thoughts: If Hans Klok is old school, Mat Franco is new school. The show was fun for the whole family, and is even more special that he does some illusions that are very specific to the night he shares with you, the audience. 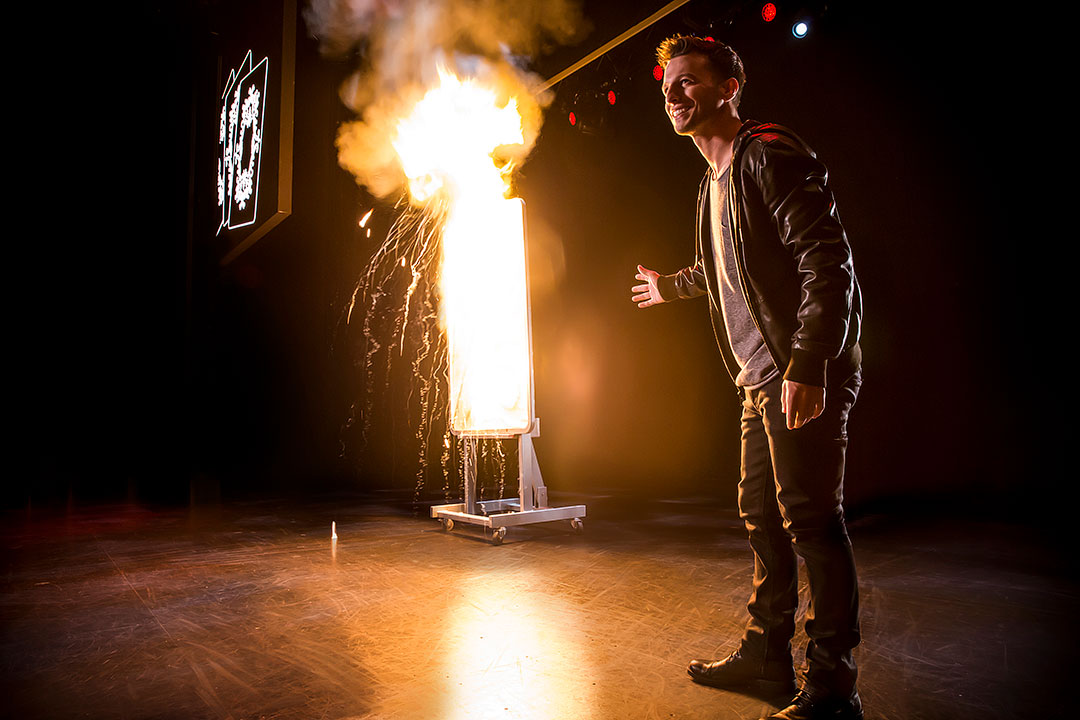 Synopsis: Terry Fator is a singer, comedian, ventriloquist and celebrity impressionist who burst onto the national scene after winning “America’s Got Talent” in 2007 (despite the fact Winston said he won it for Terry). A native of Texas, Terry spent over 20 years on the road performing at everything from schools to county fairs before becoming a Vegas headliner.

Our Thoughts: Terry Fator was the first ventriloquist we’ve seen and we were amazed by how many characters and voices he does spot on. We had the chance to meet him before the show, and he talked about how he’s always changing acts in the show to keep things fresh. It was also cool to see that a portion of his profits goes to various charities. 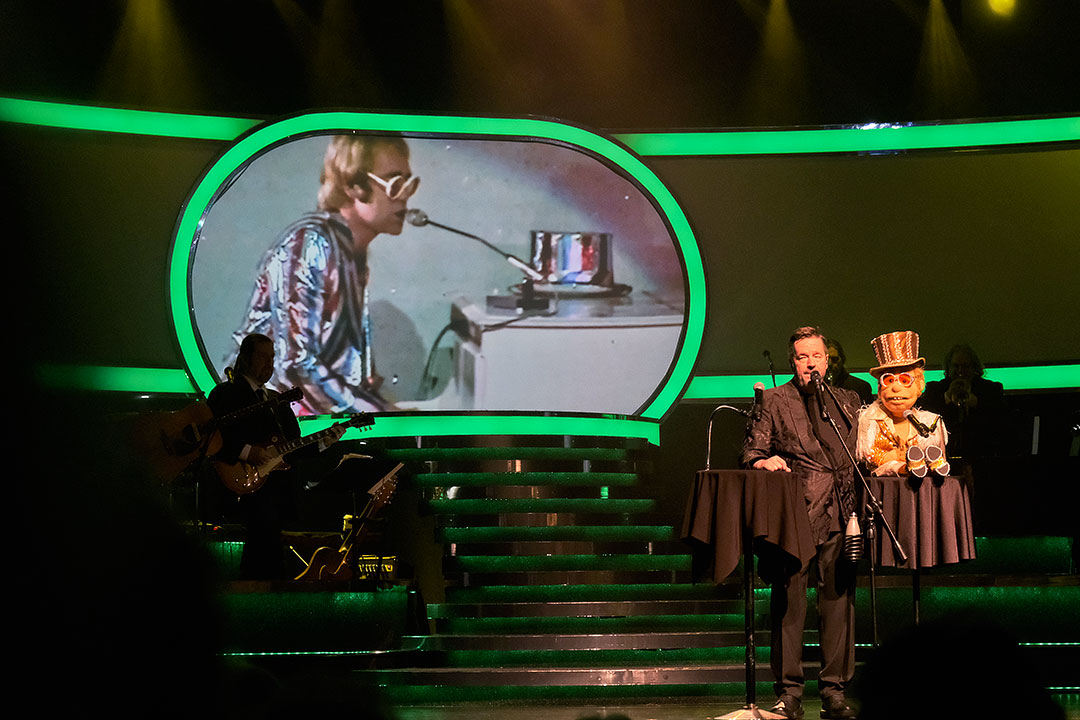 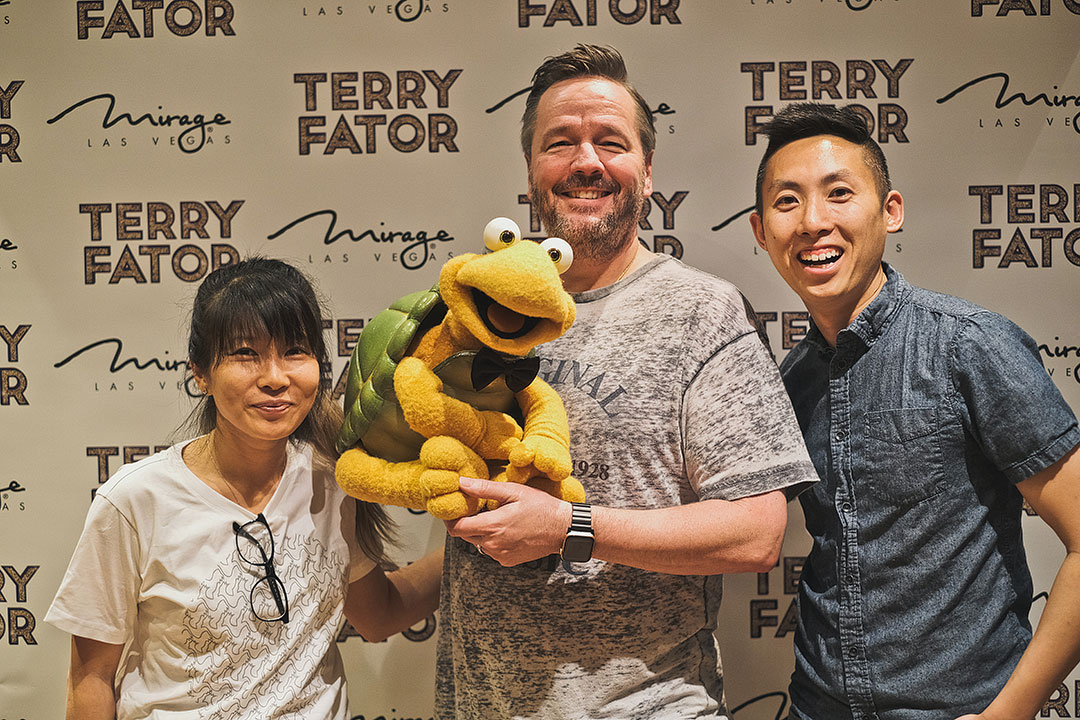 Synopsis: After 36 years of selling out every show, the Comedy Cellar has now opened its first West Coast location here at Rio All-Suite Hotel & Casino. “The Cellar,” as insiders call it, brings its unique vibe from the iconic, underground, Greenwich Village, “brick wall and stained glass,” low ceiling design and feel —to its new, intimate 300-seat club at Rio. Even the menu is entertaining, as the food and bar service is provided by Rio’s world-class chefs and bartenders.

Our Thoughts: While living in NYC, we had fun checking out its comedy scene. We visited a few different comedy clubs including Comedy Cellar, and only realized after moving back to Vegas that they had a location here too. The one in Vegas had a very similar setup and vibe. We thought the talent happened to be better here than in NYC, but we also could have been lucky with the lineup. Our theory, though, is that they have to be pickier with who they choose here, since they are paying to bring them into Vegas vs a lot of them live in NYC.

Pro Tip: Check the site here to see who is on their current line up. 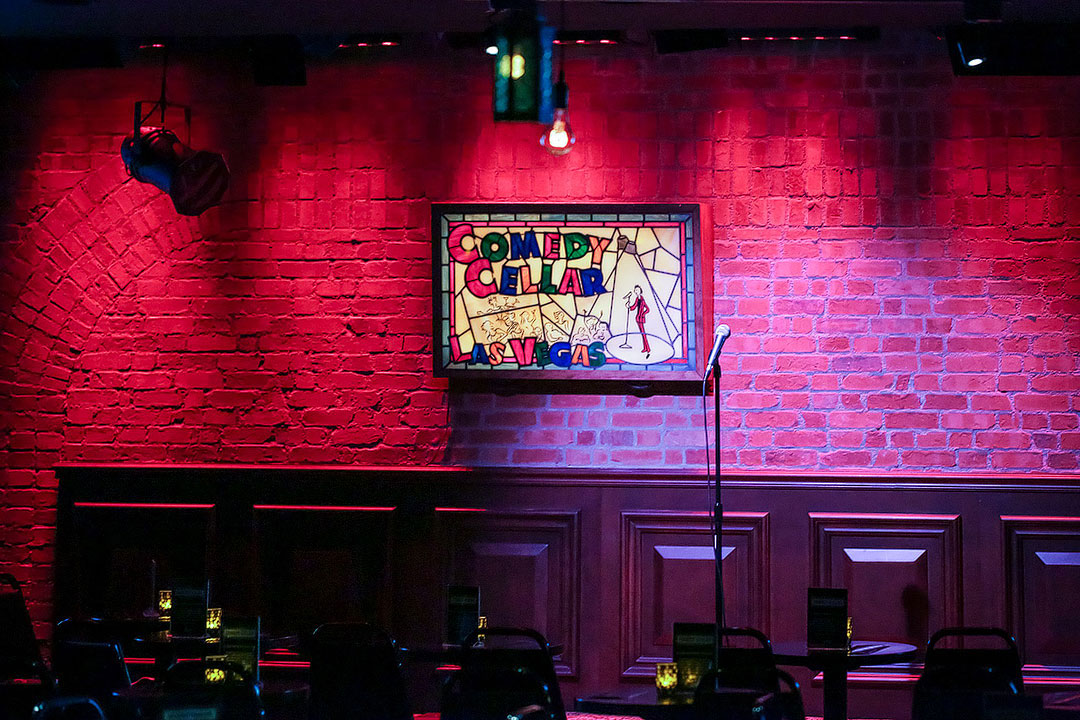 8. Gospel Brunch at House of Blues

Synopsis: This is an all ages event. Join us on Sundays for The Sunday Gospel Brunch, House of Blues legendary dining and live music show. Featuring a rotating cast of the area’s biggest and brightest gospel and R&B talents, you’ll enjoy traditional and contemporary gospel songs. Treat yourself to an amazing all-you-can-eat buffet featuring breakfast favorites, plus tender carving stations, southern specialties and mouth-watering desserts. Don’t miss our signature chicken and waffles! And, if you’re in the mood, you might end up on stage waving a napkin and dancing off some of that delicious cuisine.

Our Thoughts: If you prefer food with your entertainment, check out the Gospel Brunch at House of Blues. There is a massive spread of food and the choir is top-notch. They do a great job in getting everyone involved during the show and keeping it lively.

Pro Tip: House of Blues also has a full on concert venue at the same location. We went to see Hanson perform and got seats on the second balcony. 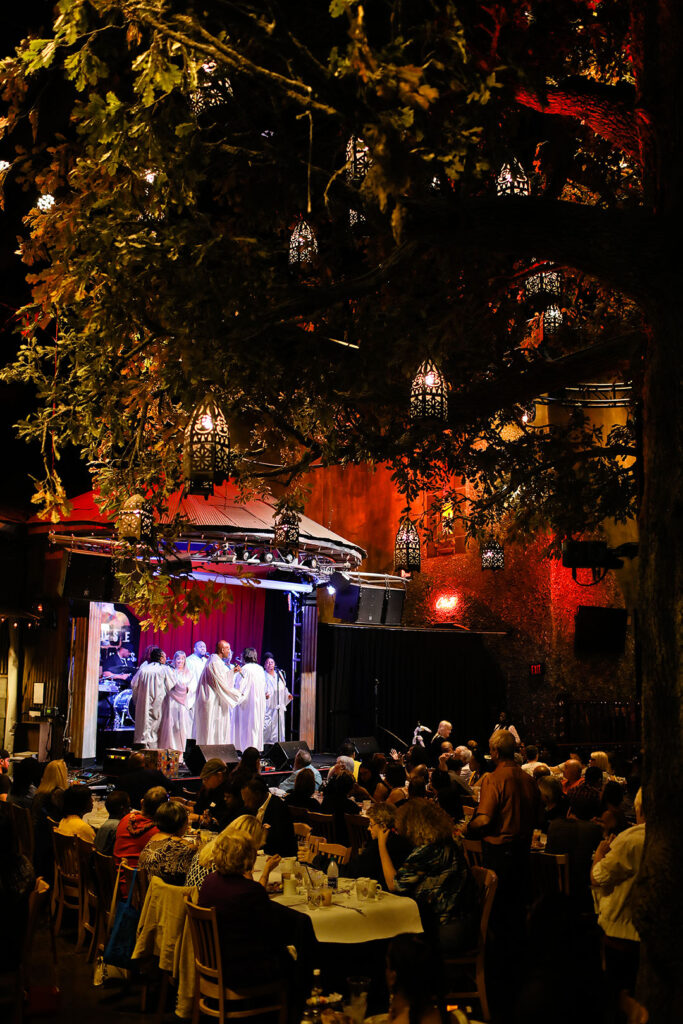 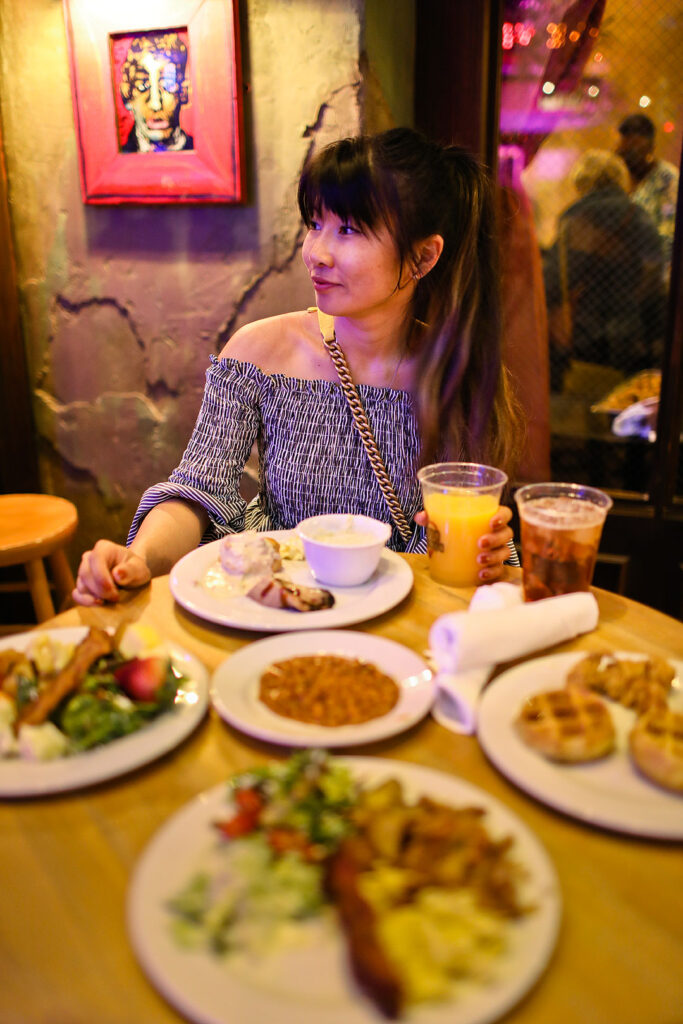 Synopsis: The Chippendales Las Vegas Show at the Rio is the sexiest display of live entertainment and the men are bringing you the heat. Get fired up because these guys are gonna make you melt. It’s 75 minutes of energy and entertainment as the men dance, strip and sing. That’s right ladies… the most doable men in show business also perform sweet, sweet serenades.

Our Thoughts: We have a friend who dances in Chippendales, so obviously that’s the reason we had to go see it. ;) While a couple of girlfriends were in town, we thought it was the perfect opportunity to go (Jacob included). It was a fun time. Even Jacob said he found it entertaining and less awkward than he had expected. Say hi to Demitri and go buy all his merch!

Pro Tip: Bring some earplugs just in case. This goes for all the shows that are going to attract bachelorette parties and screaming ladies. One of them behind us in particular had an unbearably high pitched scream. 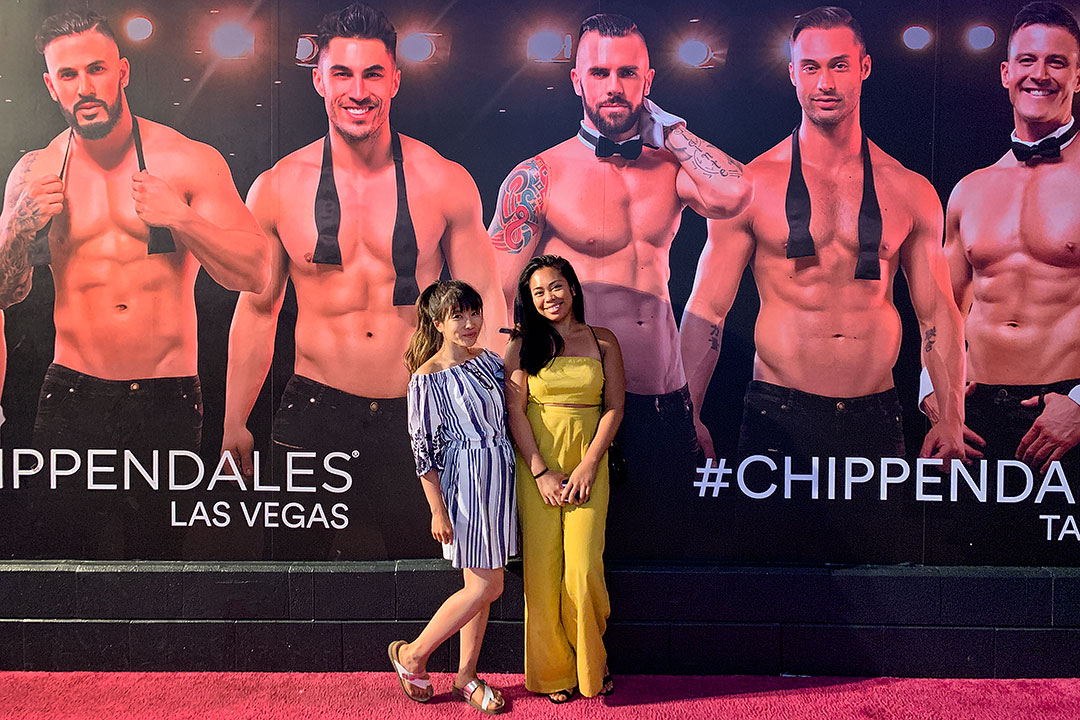 Vegas attracts a lot of talent, and many artists come in for a residency, whether it’s a week long or an entire year. We’ve seen Mariah Carey perform, Britney Spears (the most disappointing show I’ve seen), and recently Lady Gaga! Out of all the current shows, we highly recommend Lady Gaga’s Enigma show. The Enigma story line threw me off, but ultimately she’s such a talented performer, singer, and song-writer.

Local Tip: Depending on the length of their residency, tickets can go fast! As soon as you see someone you’re interested in seeing, get tickets so you don’t miss out. Gaga tickets were gone so fast!

More: The Truth Behind the Mariah Carey Las Vegas Show 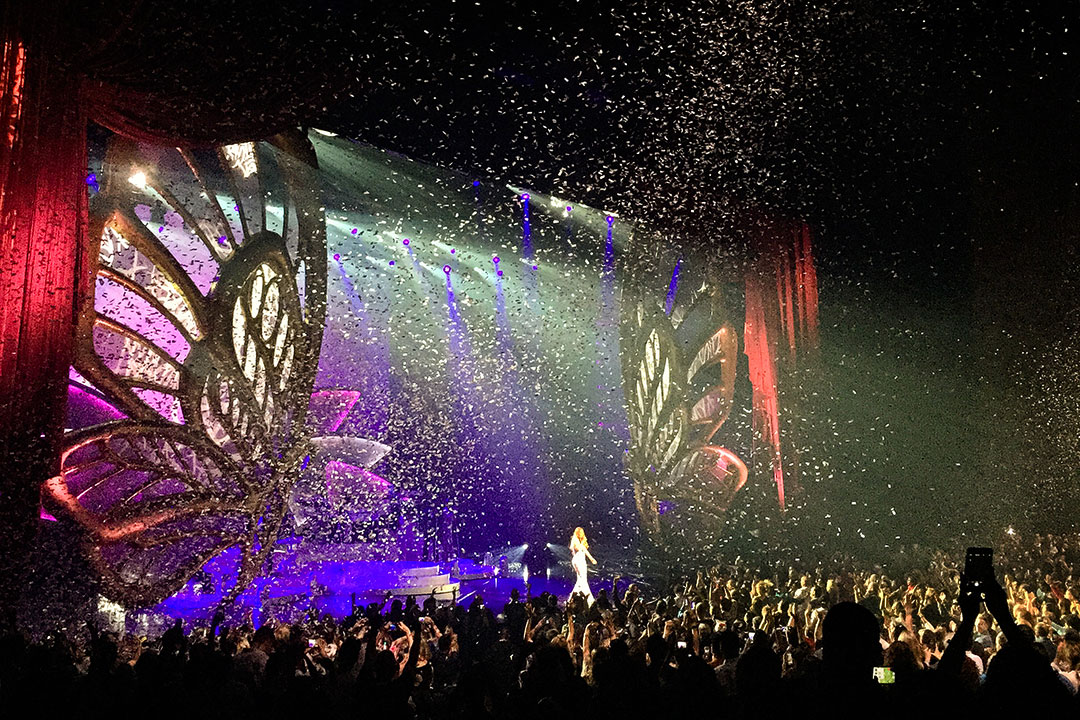 Complete List of Musicals and Broadway Shows in Las Vegas

Most of these shows are playing at the Smith Center.

More: Ultimate Guide to the Best Broadway Musicals and Plays

These shows are 18+ unless noted otherwise.

These shows are 18+ unless noted otherwise.

Affordable Shows ($50 and Under)

What to Pack for Las Vegas

Have you seen any of these Las Vegas shows? Which one has been your favorite so far? I’m sure your wallet will thank you for the break from gambling. You may have to dish out some money, but at least you won’t feel as bummed about it after.

PrevPrevious9 Beautiful Day Trips from Prague You Shouldn’t Miss
NextHow We Made Over $41.1K in Sep – Travel Blog Income ReportNext 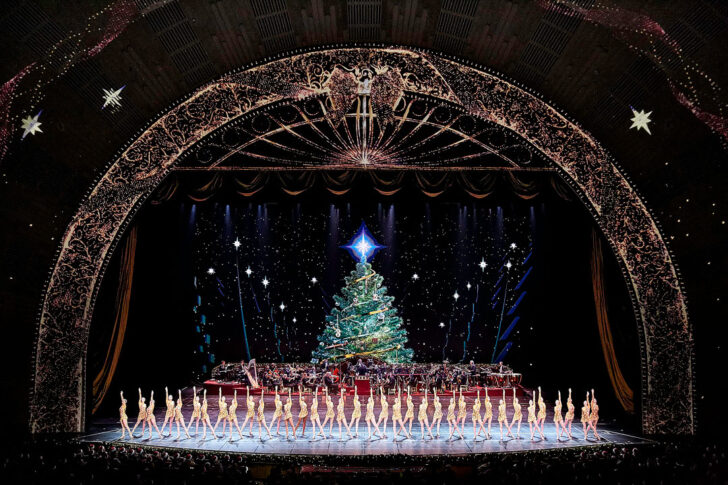 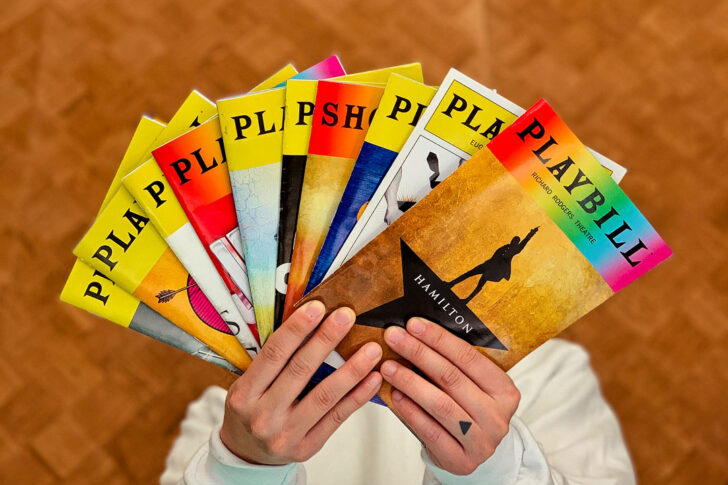 Your Ultimate Guide to the Best Broadway Musicals and Shows 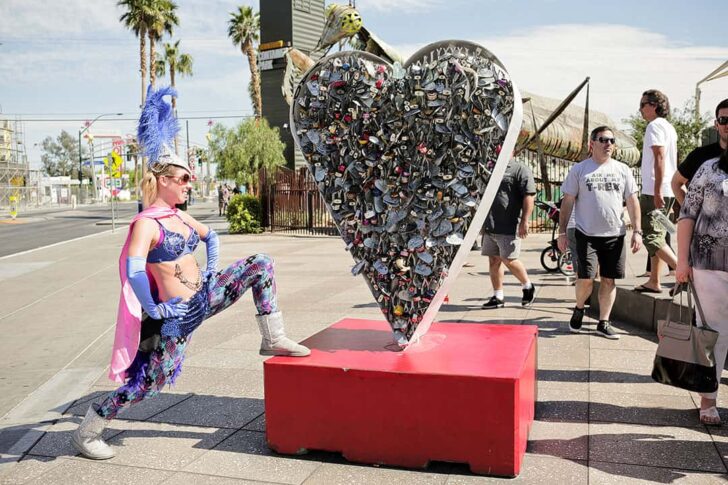