There are so many places we haven’t been and so many places we also want to revisit in our lifetime. We may even need two or three lifetimes to get through our list! ;) One thing we want to start doing is prioritizing destinations that demand more urgency to visit. We realize many of them won’t completely disappear within our lifetime, but still their landscapes are changing every day. 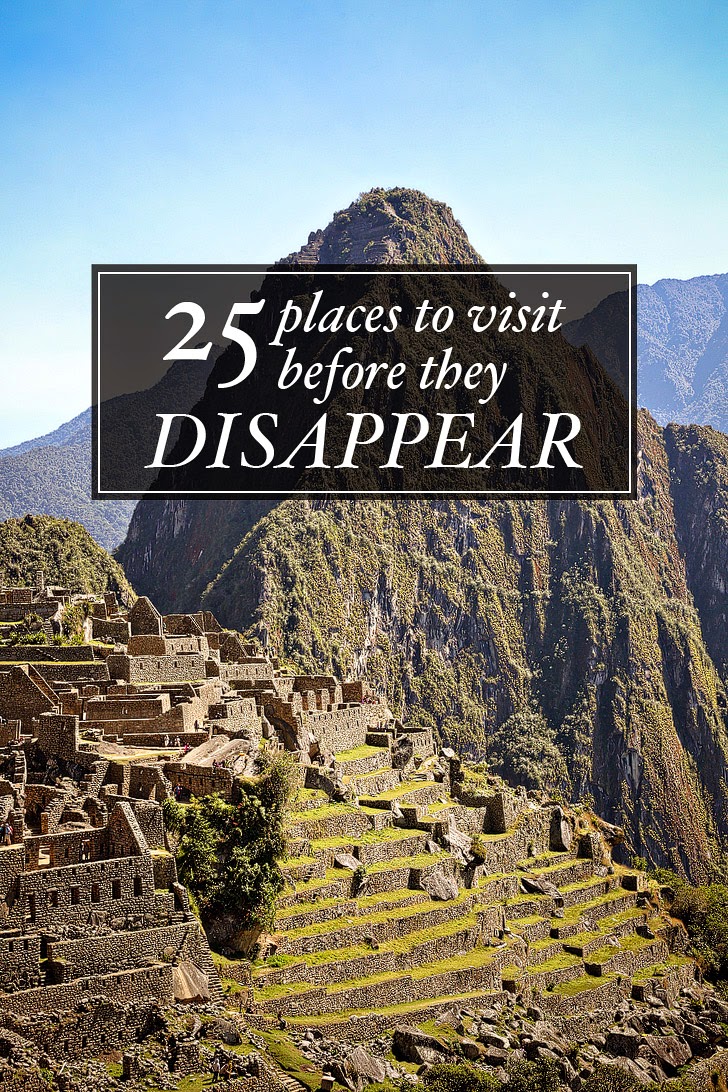 25 PLACES TO VISIT BEFORE THEY DISAPPEAR

There were 150 glaciers in Glacier National Park over 100 years ago and only 27 were left in 2005. By 2030 they’re all expected to disappear, which will change the ecosystem for good. Montana, I see you!

Climate change seems to be the general theme. The rising ocean temperatures, pollution, and increasing number of cyclones are destroying this beautiful reef. Half of the reef has died and 89% of baby coral has declined from the mass bleaching, which happens because of stress from environmental changes.

The Sahara in Africa, which is the largest desert in the world, is growing 0.5 miles per month! It’s partly due to climate change. Before we know it, it will cover all of Northern Africa, which will change the entire continent.

It’s the lowest-lying country in the world at an average of 1.5 meters above sea level. If sea levels continue to rise, it could easily be underwater in our lifetime.

Rising sea levels have made the threat of Venice sinking a reality. Every year the frequency of floods increase, so it makes you wonder how much longer Venice can stay dry. 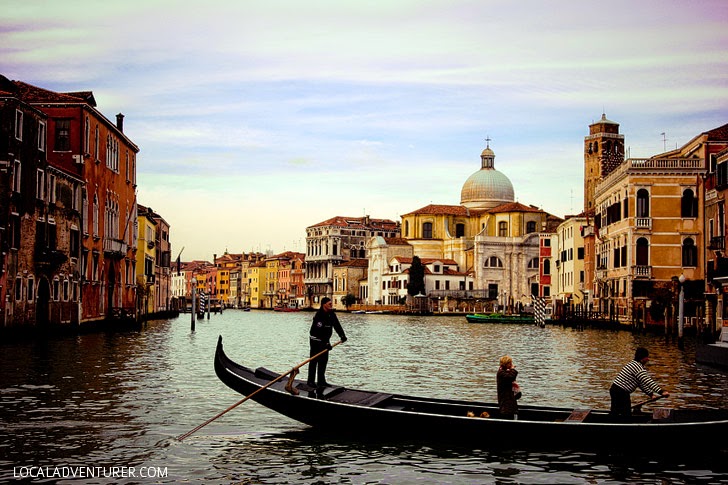 The glaciers that make their homes in Patagonia are retreating due to global warming, which is slowly altering its iconic landscapes. Since we love wearing Patagonia gear, we feel like we should visit at some point.

The Arctic is heated up twice as fast as the rest of the world due to global warming, which could result in the complete destruction of the Alaskan Tundra as we know it.

Freshwater is already hard to come by and is quickly drying up in South Australia. This results in more wildfires which is affecting the wildlife, cities, and towns in the area. Even from our most recent trip in 2019, we saw terrible effects of the brushfires killing an estimated one billion animals and some animals going extinct.

Because they are at a lower altitude than the Rocky Mountains, the Alps are effected more quickly by global warming. Some predictions say they will be gone by 2050.

We’ve both been to the Dead Sea separately, but we hope to go again together. The Dead Sea has shrunk by a third in the last 40 years and continues to recede every year. Though it will never disappear entirely, the environmental changes will leave it unrecognizable. 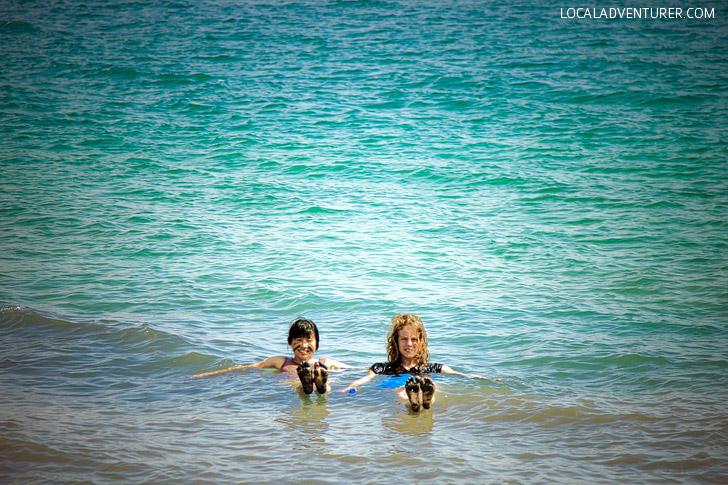 A tropical paradise, this collection of islands is facing beach erosion and coral dying off. Experts say that the Seychelles will be submerged in 50-100 years.

Known for its huge statues, the local culture is fading, so in efforts to preserve its history, there have been efforts to significantly limit the tourism to the island.

This unique continent is apparently thawing! Although there is still time before it will be gone, efforts to minimize the environmental impact will be limiting how many cruises can sail there and where they can sail. We always imagine an Antarctica Expedition as being one of our final big trips, but we will go the first opportunity we get.

The islands coasts are continuously being hammered by heavy winds which lead to erosion of up to 40 inches a year. The wall of sea ice that protects it is also melting… quickly. The ice may completely melt in the next 75 years which will make the shores even more vulnerable.

While we visited, we saw how crowded this ancient city gets, and that’s already with the current limitations of allowed visitors. To ensure that this city stays around, they will continue to closely watch how tourism is affecting it and will continue to decrease the number of people allowed to go. (Pro tip: To get a less crowded view of Inca ruins, do the 4-day hike.) 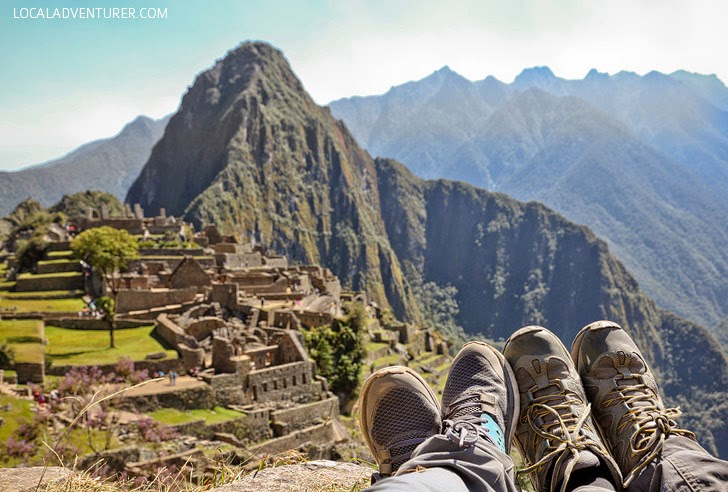 This glacier has been melting for the past 125 years, with some parts shrinking up to 9.8 feet a year. As the most-visited glacier in North America, be sure to see it before it’s gone!

The ice caps of this picturesque volcanic mountain are disappearing and the rising climates aren’t helping. In addition because the trek is becoming more popular, they may limit the permits even further. This hike is definitely on our bucket list.

Air pollution, increasing population, and tourism have been eroding the structure’s exterior. Many organizations and preservation groups are pushing to have India close this wonder of the world until it can be properly restored.

Tucked away in the Himalayas, this country has been under Chinese control since 1950. Because of this, the language and many cultural traditions are disappearing. The Chinese government also randomly freezes permits for tourism, so depending on the current situation you may not even be able to visit.

Already known for its stupidly high temperatures, it is predicted that it could rise over 8 more degrees F in the next century. Even the slightest increase could lead to the extinction of some of Death Valley’s unique species, result in more powerful thunderstorms, or spark wildfires. 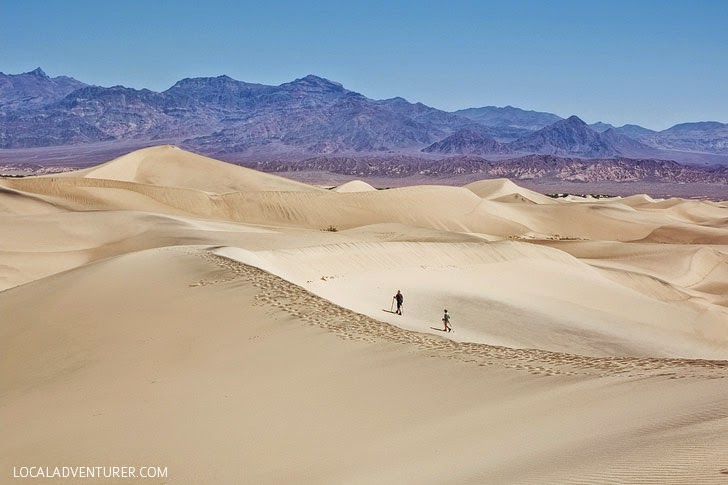 Logging, burning, and poaching threaten the forests and inhabitants of this island, including the lemurs and some of the most unique trees you’ll see anywhere in the world.

Known for the massive Monarch butterfly migration that happens each winter (we’re talking a billion butterflies), the number has been declining the past 20 years. Deforestation, pesticide use, and severe weather may lead to these butterflies to find another home.

These famous wetlands are being threatened by pollution, invasive species, and development by humans. On top of that, we keep taking water from the Everglades which has resulted in the fact that it’s half the size that it was in 1900.

Home to the world’s second-largest rainforest, experts say that up to two-thirds of the rainforests could be gone by 2040. Mining, farming, illegal logging, and guerilla warfare and responsible for the almost 10 million acres of forest lost every year.

Threatened by tourism, this archipelago offers visitors some of the most unique wildlife in the world. But as with any place that draws a large number of tourists, there is an equal battle to preserve what can only be found here. It is an ongoing conversation to limit the number of visitors to these islands. Even 2 years before our visit, one of the giant Galapagos tortoise species had already become extinct. 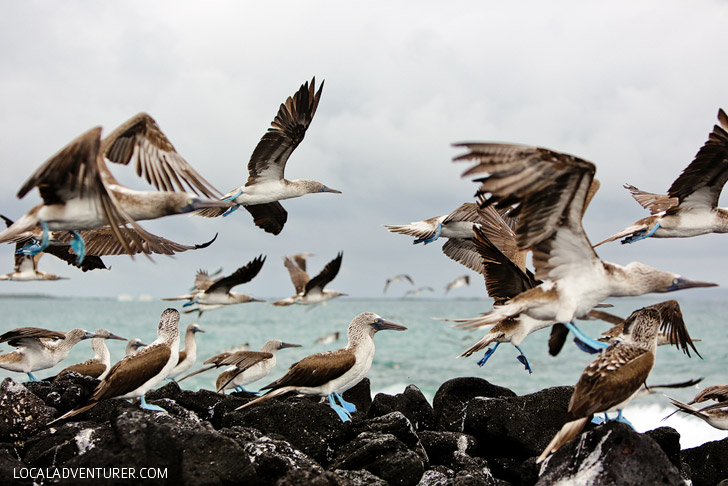 If you noticed the language changing on our posts, it’s because we’ve been occasionally writing some of our posts together (this one for example!). Can you tell?

What’s the next place on your bucket list?
Which of these have you been to already?