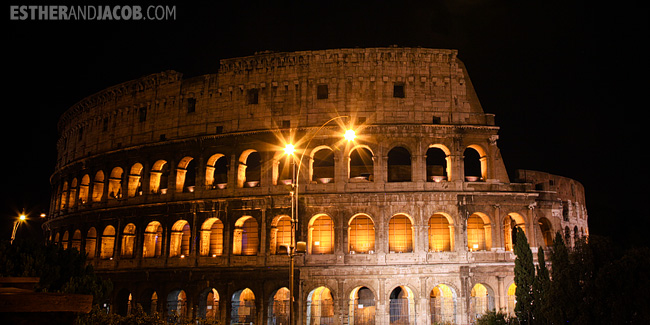 We started out our short European tour in Rome.  Rome is a highly touristy city, and there aren’t many places you can go to avoid crowds.  It doesn’t mesh as well with our travel style, since we gravitate toward more relaxing environments, but our motto is try everything at least once.  With only 48 hours in Rome, we decided to make the most of our trip and see all the major landmarks.  Photography and food, as always, was top priority.  With a group of 6, we hired a private tour guide who drove us around.  It was convenient since he was able to drive us right up to each landmark.

Because we went at the end of August, along with the massive crowds and the blistering heat, it was not the most favorable conditions to be in.  I would recommend another time of year.  Regardless, we were able to get a glimpse of the rich history of the city. 2:00PM Trevi Fountain: Toss a coin in & have a gelato break 4:00PM Piazza Di Spagna (Spanish Steps): May is the best time of year to visit the Spanish Steps when they are decorated with azaleas. 6:00PM Dinner at La Tavernaccia Da Bruno (Via Giovanni da Castelbolognese 63, 00153 Trastavere, Roma, Italia)  This was by far our best meal in Rome. Our tour guide was reluctant to take us because it wasn’t very fancy, but I was dying to try it after reading where to eat in rome by the city’s cabbies.  So happy we went. If it was on yelp, I would give it 6 stars. :) 7:30PM Break at the hotel
9:00PM Night time photos at the Monument to Vittorio Emanuele II: who is the first king of unified Italy.  This is also the location of the Unknown Soldier Tomb 9:15PM Night time photos at the Colosseum: Could not find a great angle for the Colosseum. Anyone know where you’re supposed to take the photo for the majority of the postcard shots? Tags: city guides, piazza navona, rome, things to see in rome, Trevi Fountain, unknown soldier tomb, what to do in rome, what to eat in rome