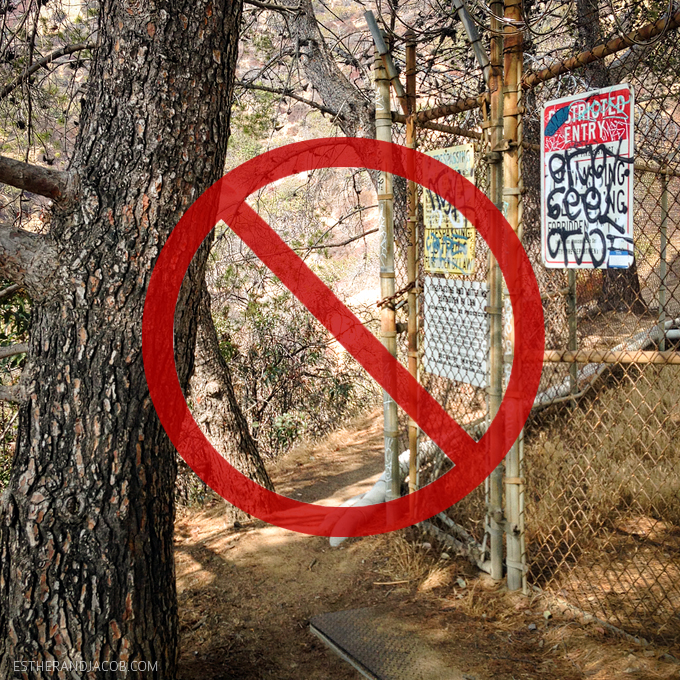 Maybe I’m just terrible with directions, but I always thought the hollywood sign hike was fairly simple to figure out by mere instinct. I tossed aside all directions, books, blogs, yelp, etc, and my friend and I decided to figure it out on our own. After all, there’s going to be tons of tourists doing it, so it shouldn’t be hard at all, right? Wrong.

There are so many wrong turns we took that it became quite an adventure. Half the people on the hike weren’t much help either, because they told us it wasn’t possible to get to the sign anymore. That’s partly true because it’s now fenced off after many years of vandalism, but you can still get behind the sign and take pictures through the fence.

Our first detour started at a flat sandy plateau where there’s a great view of the Hollywood sign. There were lots of people taking pictures there. We took this as a good sign that we were at the right place. We saw two guys far up ahead and decided to follow their lead. By this point, we pretty much couldn’t see the previous two hikers, but we continued, i kid you not, on hands and knees. We were grabbing branches to pull ourselves up. By the time we made it 3/4 of the way, we saw the hikers turn around. They told us that they got turned away by some cops. Apparently, all of us unintentionally attempted to climb up the side of the mountain in front of the sign, which is considered trespassing. We had to return to square one scooting down on our butts most of the way. It’s steeper than it appears in the photos. Then we walked down from the plateau towards what appears to be a paved fire road. This was actually the beginning of the correct trail. All was good until we got to this fork in the road. On the left, you could continue onto more paved road, and to the left, there was a dirt trail. This one actually leads to the Griffith Observatory! Luckily someone was able to tell us we were going the wrong direction. After passing the (above) fork in the road, we discovered that the “trail” was a paved road all the way up to the sign. Figures.

Third time’s the charm! There were some incredible views along the way. It was really hard getting a good angle of the sign without showing parts of the fence. I was using an iPhone for all these photos, which basically has the equivalent of a 30mm lens. Pretty wide, but not wide enough. This is the extent of what I could capture: Lastly, a perfectly good view of the sign from where we parked. It’s a 30-45 minute hike up. Point A is the address above and the blue line leads you to the sign: Have you ever been to the Hollywood sign? Would you consider yourself having a good sense of direction?

If you want to see some of my other local adventures around the Los Angeles area, you can click on the banner below: