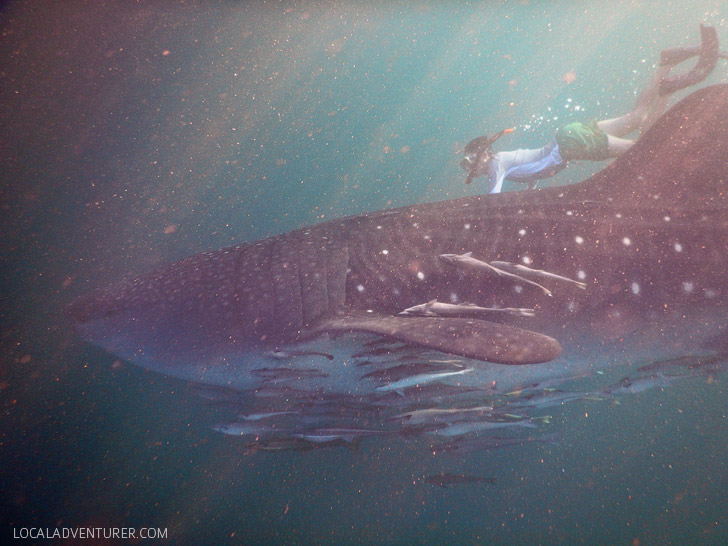 When we started planning our trip to Derawan Island in Indonesia, our guides asked us if we wanted to try to find some whale sharks (whaaaaa?! no way!). Even with plans to go look for them, we tried to manage our expectations so that we wouldn’t be disappointed. We’ve been on a handful of snorkeling trips where we didn’t see anything. We’ve never seen sharks and it was extremely lucky if we spotted a sea turtle! We are after all trying to find them in a HUGE ocean.

Our local guides told us that we need to be flexible. Sometimes they appear and sometimes they don’t. The next morning, we got up before sunrise at 5 am and headed out into the ocean. We were one of the first groups to arrive at one of the floating fishing islands to see if they’ve seen any activity. As time passed, more groups and boats started to join. After an hour, there was word that they were spotted nearby.

You could feel the excitement in the air as everyone got ready to hop in the water. I had no idea what to expect. I was terrified. But once I got in, I was blown away to see 3 of these gentle giants swimming around. For the next hour and a half, we observed, swam with, and photographed these amazing creatures. Jacob was the only one who had the balls to free dive next to them, so he got some epic shots. I was just trying to avoid getting sucked into their mouths.

At one point, we started getting stung and saw more and more jellyfish surface. There was a bigger jellyfish making it’s way up, which our guide informed us was a dangerous species, so I decided that it was time to get back on the boat! No thank you!

I even saw my favorite kind, the neon jellyfish that illuminates light right next to me. In that moment, I panicked and tried pushing it away, and the extra force of the water shattered the jellyfish! I’m still sad thinking about it. I completely forgot that neon jellyfish don’t sting. It has a short lifespan, and if it even touches a net, it shatters and dies. So beautiful and so fragile.

We couldn’t stop talking about them throughout the trip, and decided on the last day to go on a morning excursion to try looking for them again. The second time we found 2 more, and we were pretty much the only ones in the water with them.

This was the most successful snorkeling trip we’ve ever had, and I’m not sure that we’ll ever experience one quite like this. We freakin’ swam with wild whale sharks!!

TIPS FOR SWIMMING WITH WHALE SHARKS AT DERAWAN ISLAND

WHAT TO PACK FOR YOUR WHALE SHARK EXCURSION:

Would you go on this whale shark excursion? Why or why not?