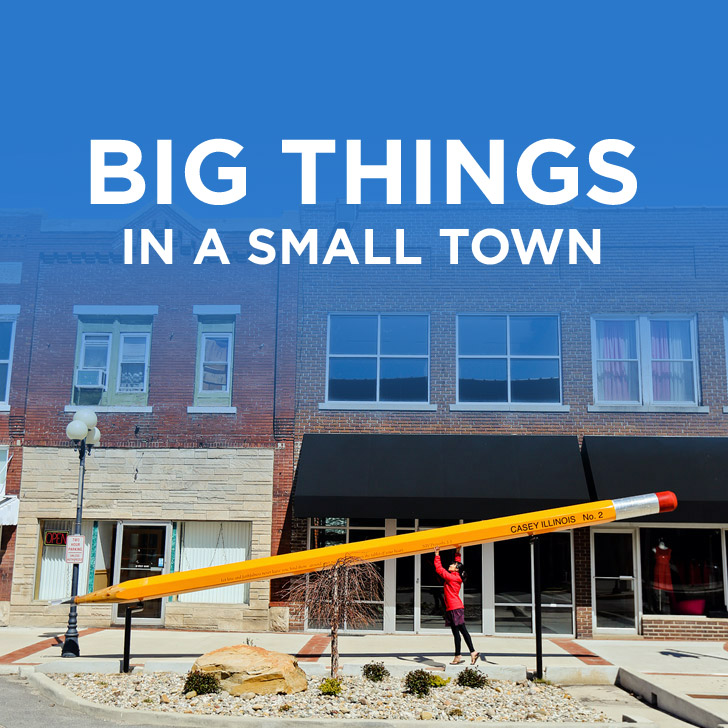 As we made our way from the Airstream warehouse in Ohio towards the west coast, we decided to stop at as many random roadside attractions as we could! Why else would you live on the road? :P One thing we realized as we drove across middle America is that America can be pretty weird (and maybe we’re weird, but we tend to like weird). The first couple of days on the road we stopped by anything and everything we could find but soon realized not everything was worth a detour or even a stop. One common theme that we saw were large (and even some of the world’s largest) versions of things. Shoes, people, rocking chairs, pencils… you name it, there was a large version of it! We even found the small town of Casey, Illinois that is home to multiple Guinness World Record items and other big objects. Their slogan is #BigThingsInASmallTown and it lives up to its name.

The World’s Largest Golf Tee was added to the Guinness Book of World Records in Jan 29, 2013. Many of the ones we saw were standalone and we rarely found them worth the detour. The town of Casey was conveniently located off of I-70, and if you are passing by, it’s worth a stop since you get to see several of them in close proximity.

Pro Tip: When visiting Casey, the Pitchfork and Tee are in their own areas that you have to drive through, but the rest are downtown. You can park and make a few blocks loop to see them all.

Have you visited any of the World’s Largest Things? Which ones?

This road trip is part of the Endless Caravan Join us by going out on the road and using #EndlessCaravan.