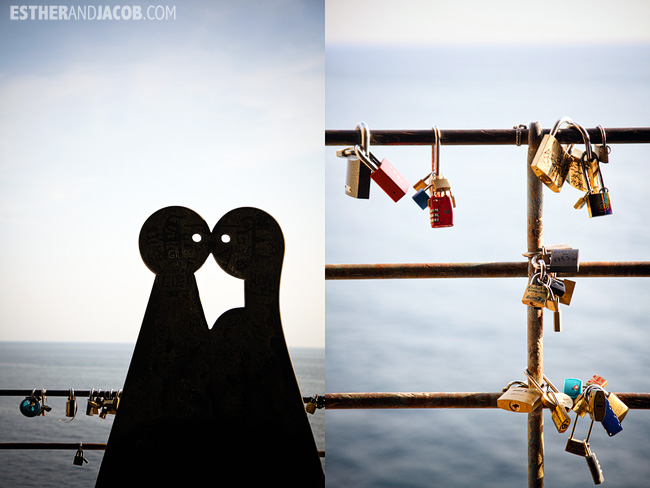 We started our hiking with Via dell’Amore (“Path of Love”), which connects Riomaggiore and Manarola.  Here’s a story of how it got its name:

The Cinque Terre towns were extremely isolated until the last century. Villagers rarely married anyone from outside their town. After the blasting of the second train line in the 1920s, a trail was made between the first two towns: Riomaggiore and Manarola. A gunpowder warehouse was built along the way, safely away from the townspeople. (That building is today’s Bar dell’Amore.)

Happy with the trail, the villagers asked that it be improved as a permanent connection between neighbors. But persistent landslides kept the trail closed more often than it was open. After World War II, the trail was reopened, and became established as a lovers’ meeting point for boys and girls from the two towns. (After one extended closure in 1949, the trail was reopened for a Christmas marriage.) A journalist, who noticed all the amorous graffiti along the path, coined the trail’s now-established name, Via dell’Amore: “Pathway of Love. Today, many tourists are put off by the cluttered graffiti that lines the trail. But it’s all part of the history of the Cinque Terre’s little lovers’ lane.”  – Rick Steves. Read more here. If you looked down from the trail, there were a lot of people sunbathing along the coast. Lover’s Lock, a place to seal your eternal love: There were a lot of locks along the path The end of Via dell’Amore, Manarola: You can see more tips on traveling in Cinque Terre here.