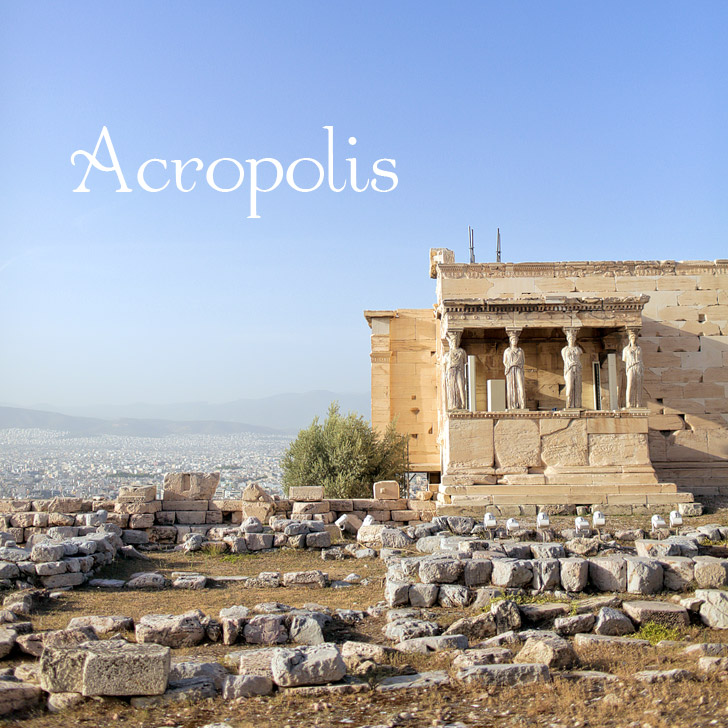 I am no history buff. History can be interesting, but on my list of information I like to retain, it’s been lower priority for me. When we travel, we mostly gravitate towards beautiful landscapes and nature, but occasionally we like to check other sites off our ol’ bucket list. To our untrained eyes, all the different ruins can start looking the same. This is where knowing a thing or two about the historical significance can really deepen your experience.

We’ve put together a map of the Acropolis of Athens for you and a photo guide. 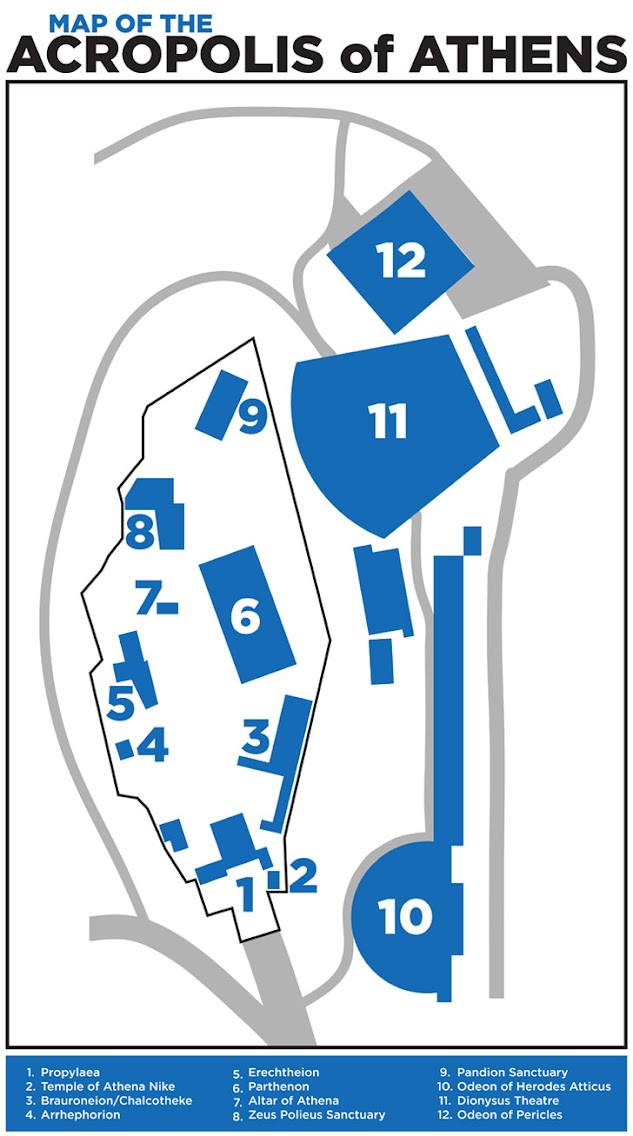 This is the monumental gateway and entrance to the Acropolis in Athens. 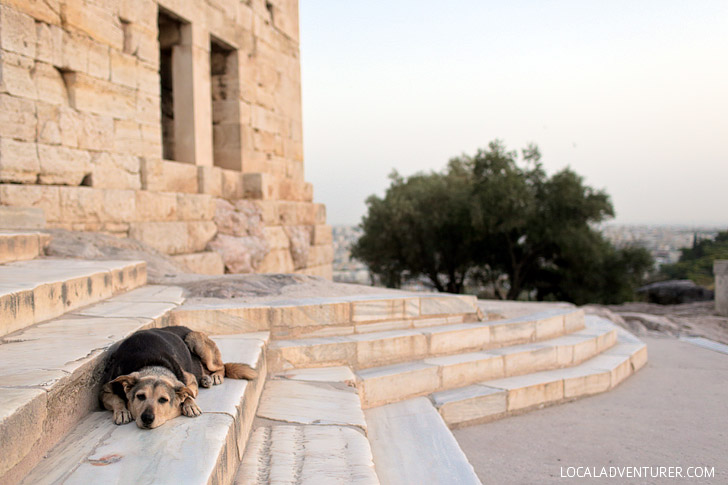 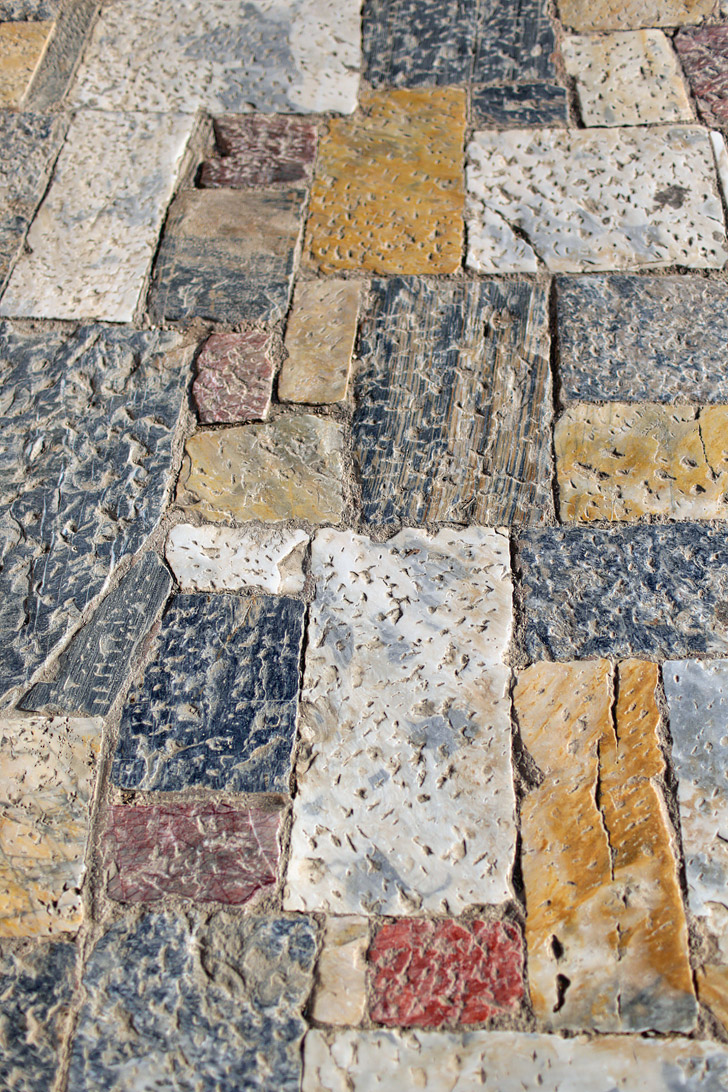 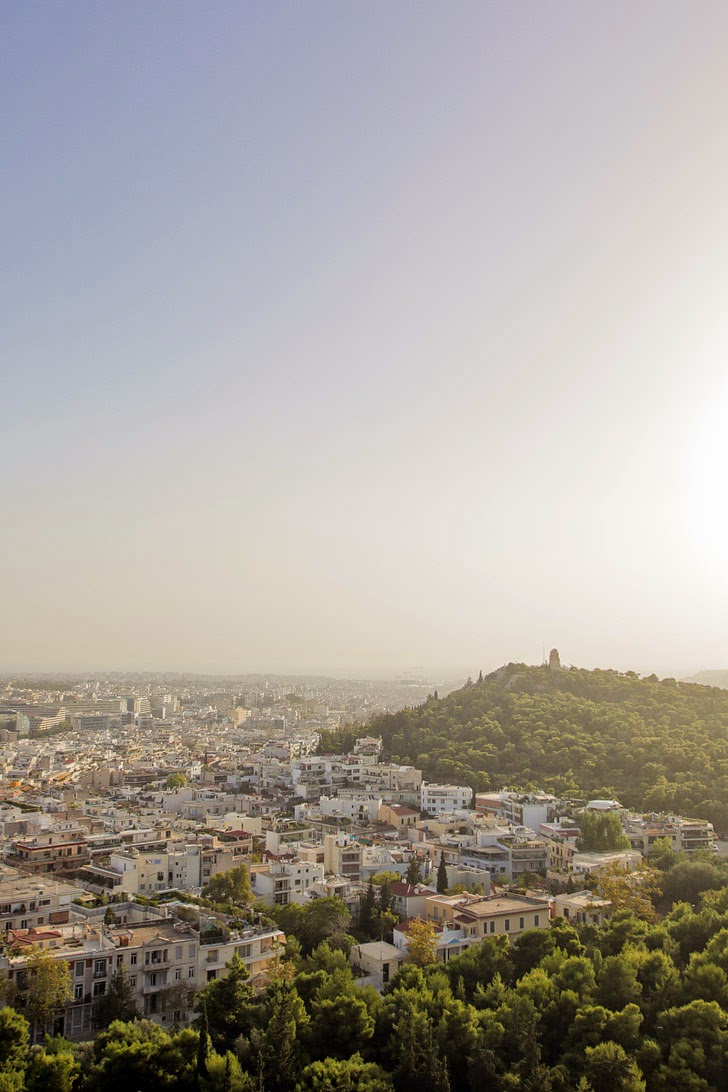 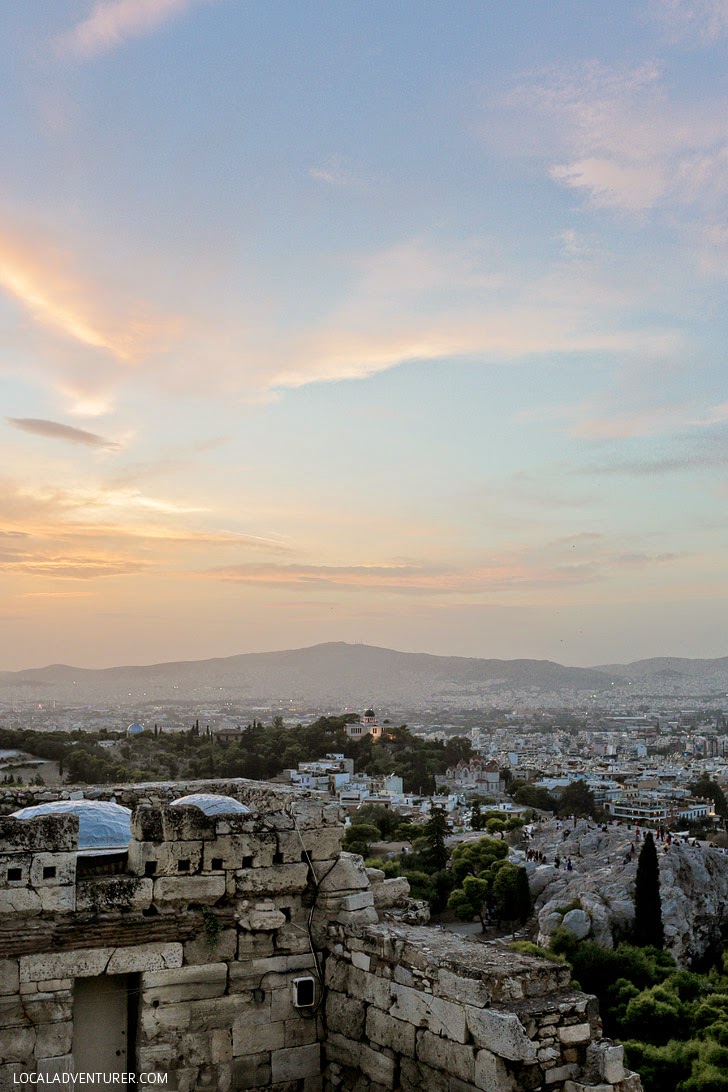 Sitting in front of the Monument to Agrippa, Propylaea. 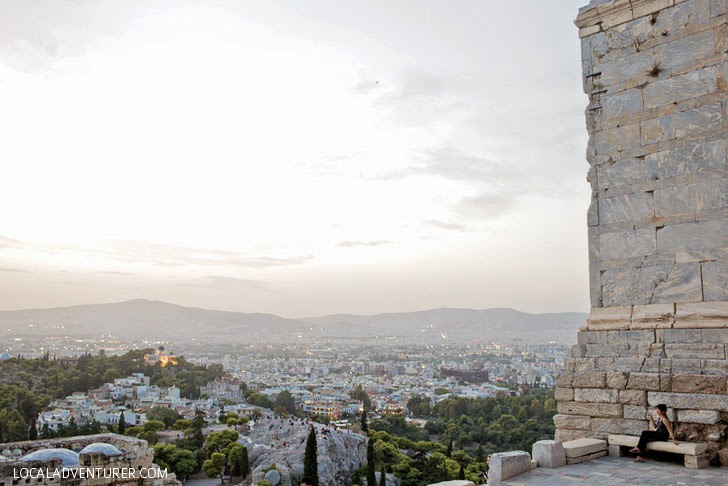 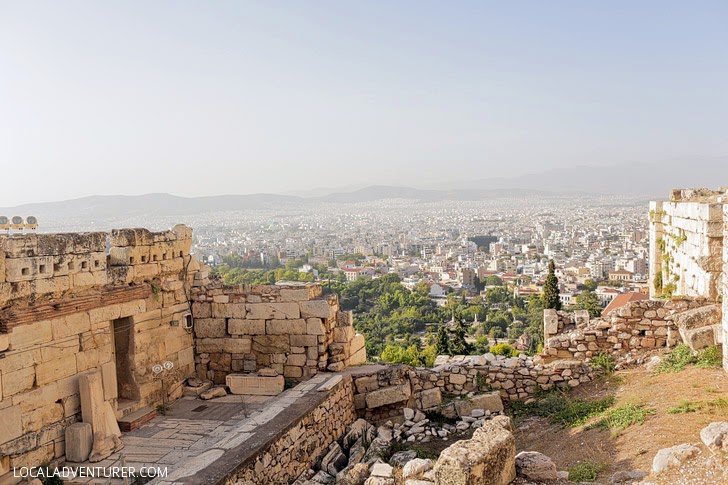 When you walk up Propylaeia, you will see the Temple of Athena Nike on your right. Athena was worshipped as the goddess of victory (Nike in Greek), in war, and wisdom. The temple is the earliest fully Ionic temple of the Acropolis. 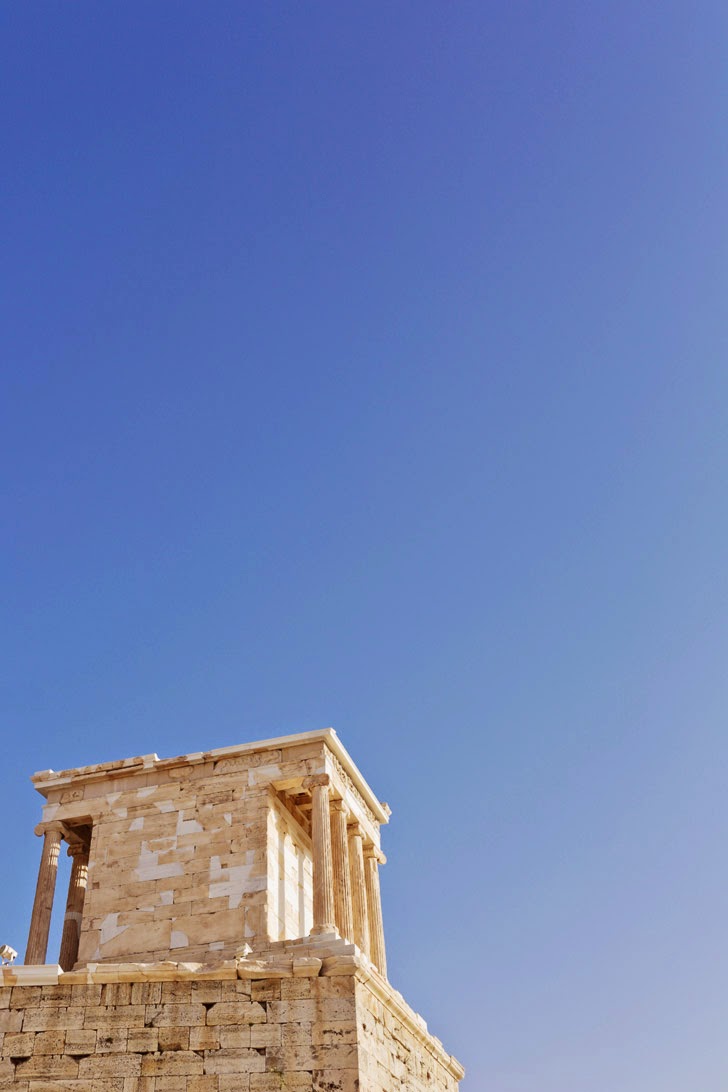 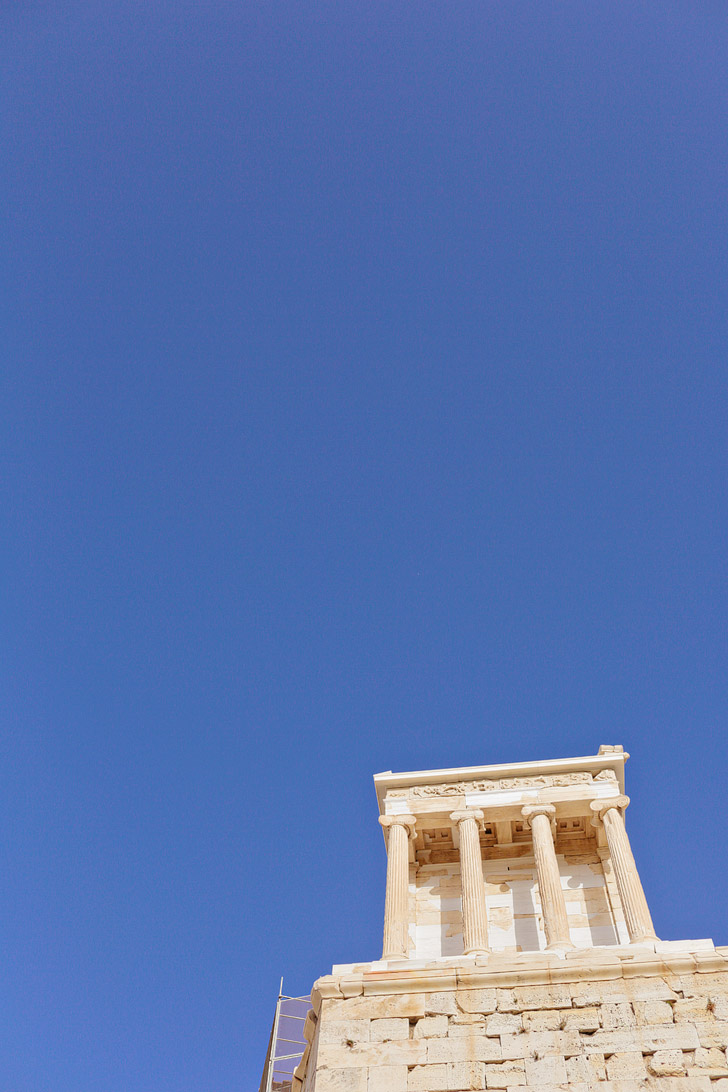 The Brauroneion sanctuary was built for Artemis Brauronia who was the protector of women in pregnancy and childbirth. It’s not totally clear what the Chalkotheke was used for but its translation is bronze store.

This building was used as lodging for the Arrephoros who prepared the traditional clothing for women which would be used in the Panathenaic Games.

5. The Erechtheion & Foundations of Old Temple of Athena

This temple was dedicated to both Athena and Poseidon. In front of the Erechtheion, you can see the ruins of the foundations of the Old Temple of Athena. Took a lot of photos, so separate post coming soon! 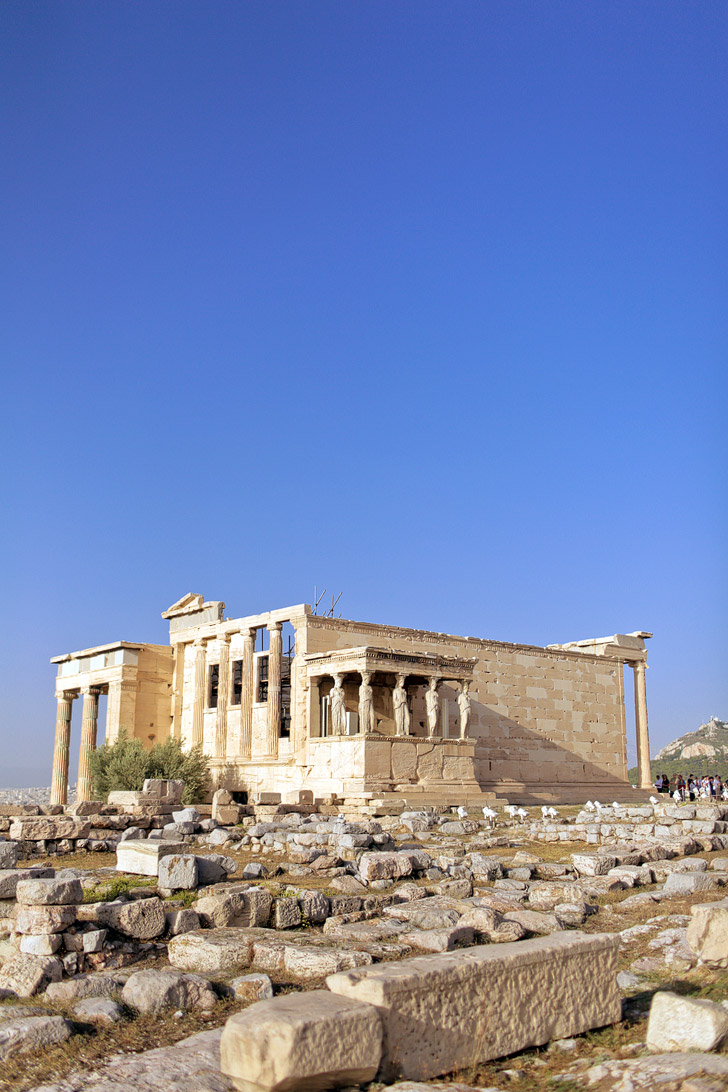 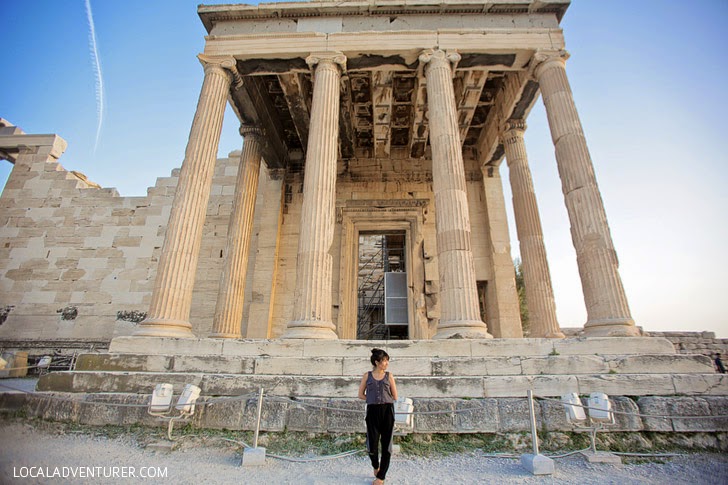 This is the most iconic temple and centerpiece of the Acropolis. See our full post here. 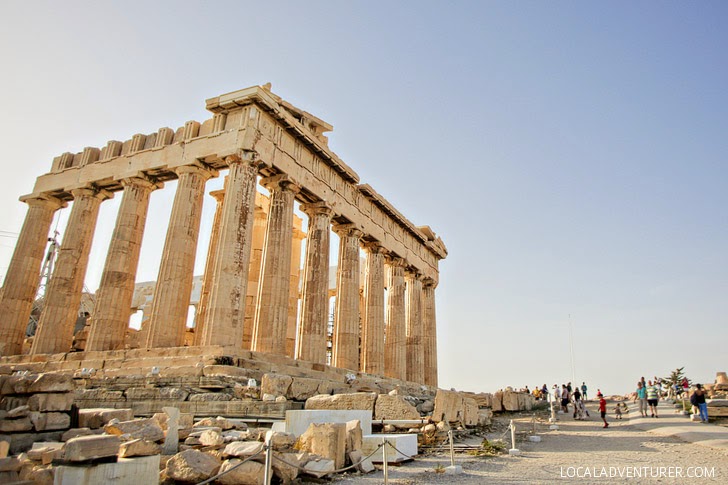 A former structure dedicated to the goddess Athena stood within a narrow temple with images of Athena showing her dominance.

This sanctuary was an open-air structure dedicated to Zeus Polieus, or the city protector.

The Pandion Sanctuary was the location of the hero shrine of Pandion.

This stone theater structure was a venue for music concerts holding up to 5000 people. It was considered a ruin in 267 AD, but is still used as a venue today. Among others, Frank Sinatra, Sting, Elton John, and Andrea Bocelli performed here. 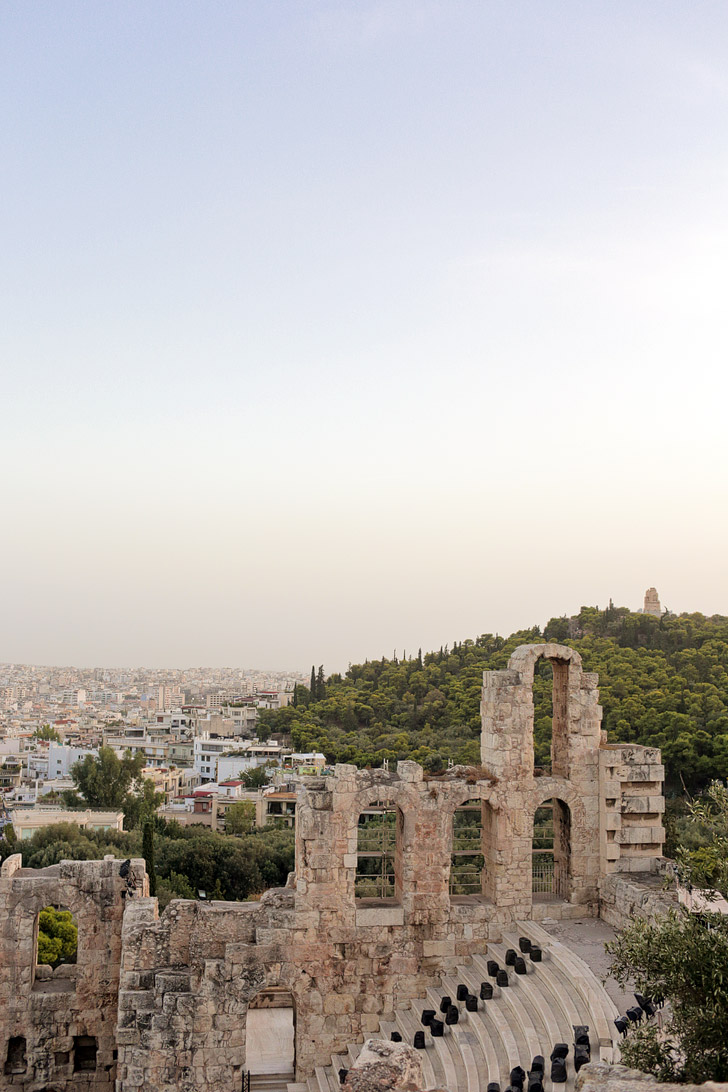 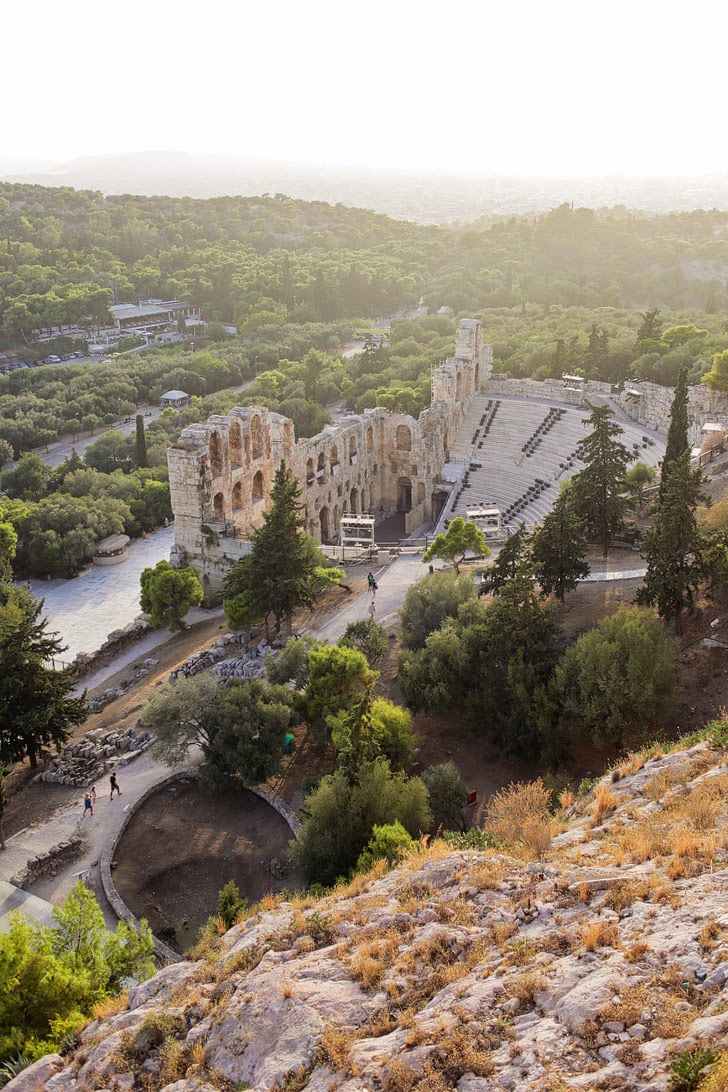 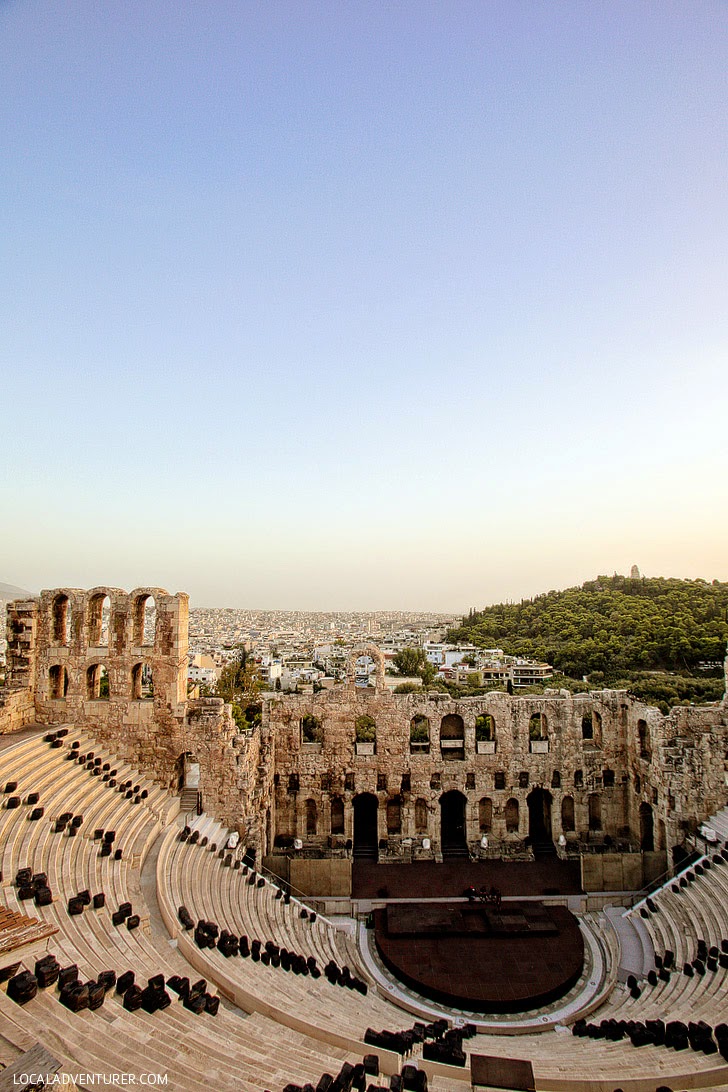 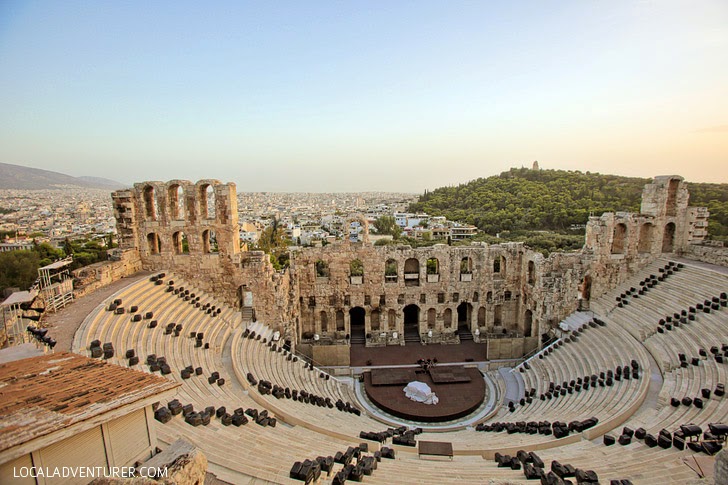 This open-air theater was used for festivals in honor of the Dionysus, the god of grape harvest, wine and winemaking, theatre and religious ecstasy, of ritual madness, and fertility. 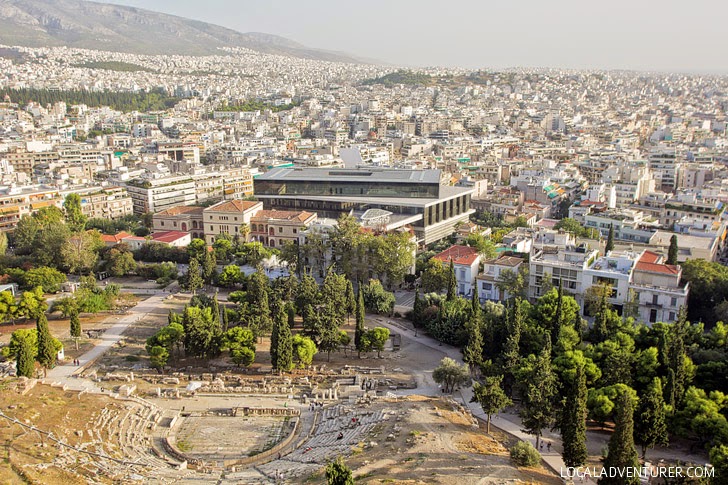 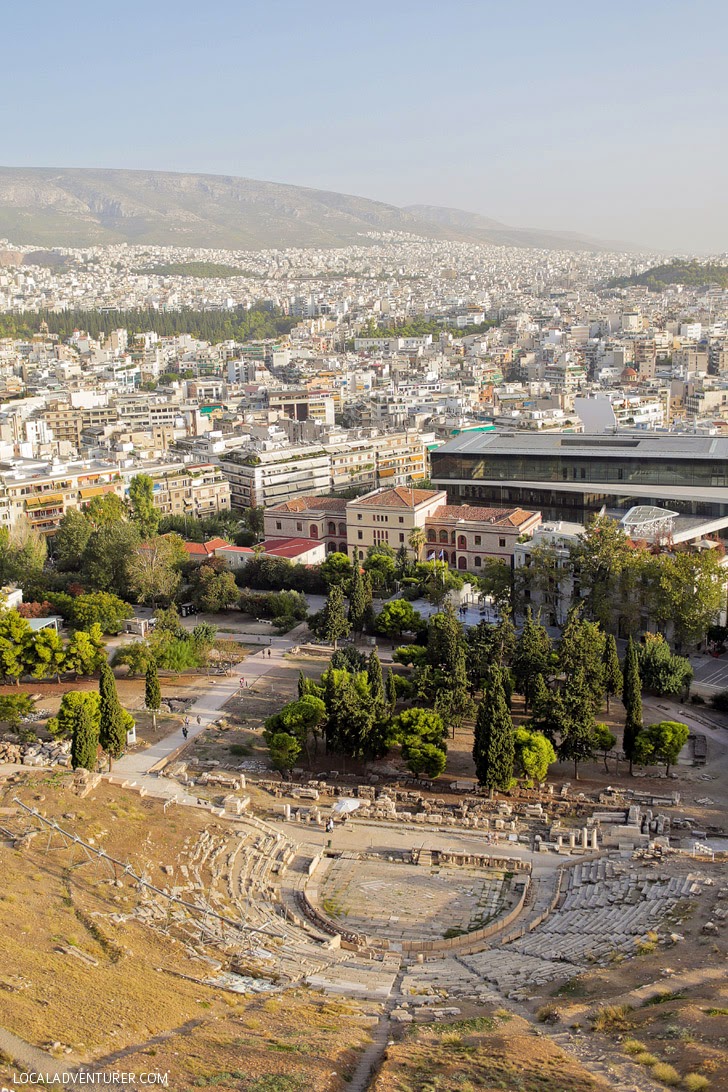 Odeons are built for music (singing, shows, poetry etc) and this particular one was built by Pericles, one of the most influential Greeks of his time, for musical contests.

Here are more views of the city of Athens from Acropolis: 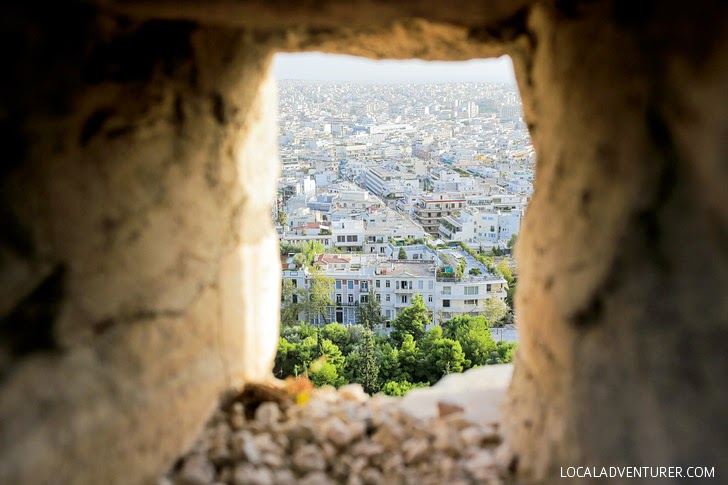 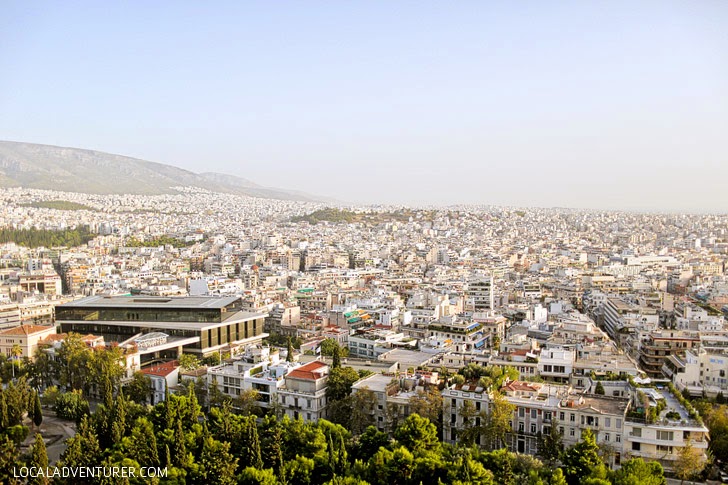 You can see a view of Mount Lycabettus, a popular tourist destination in Athens. 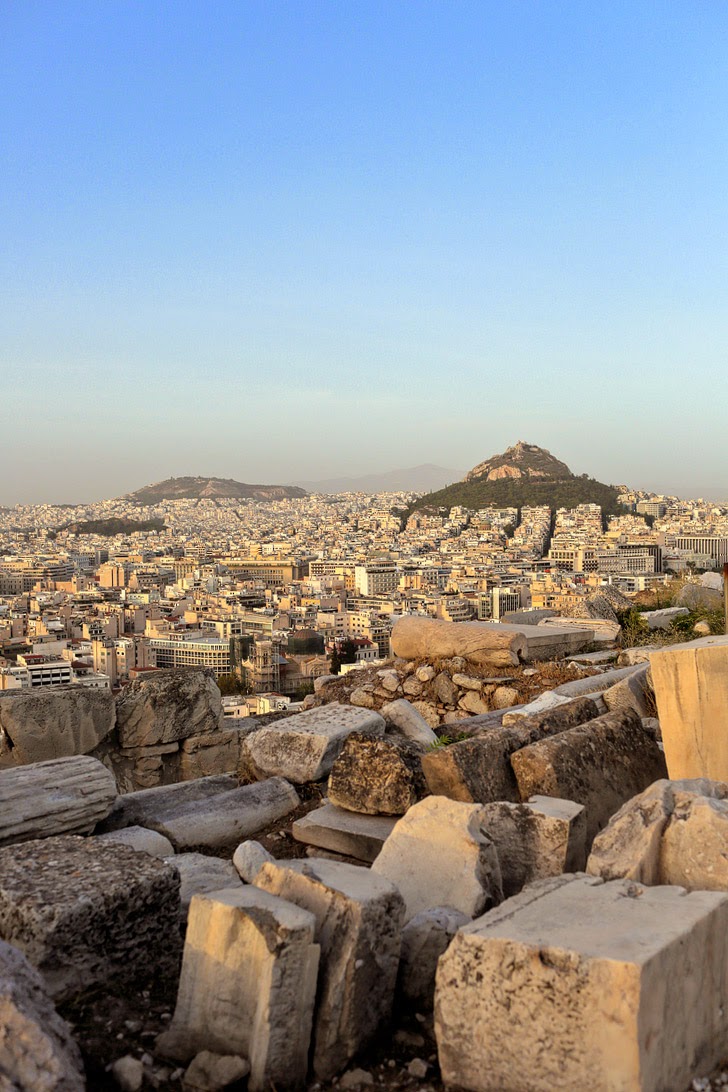 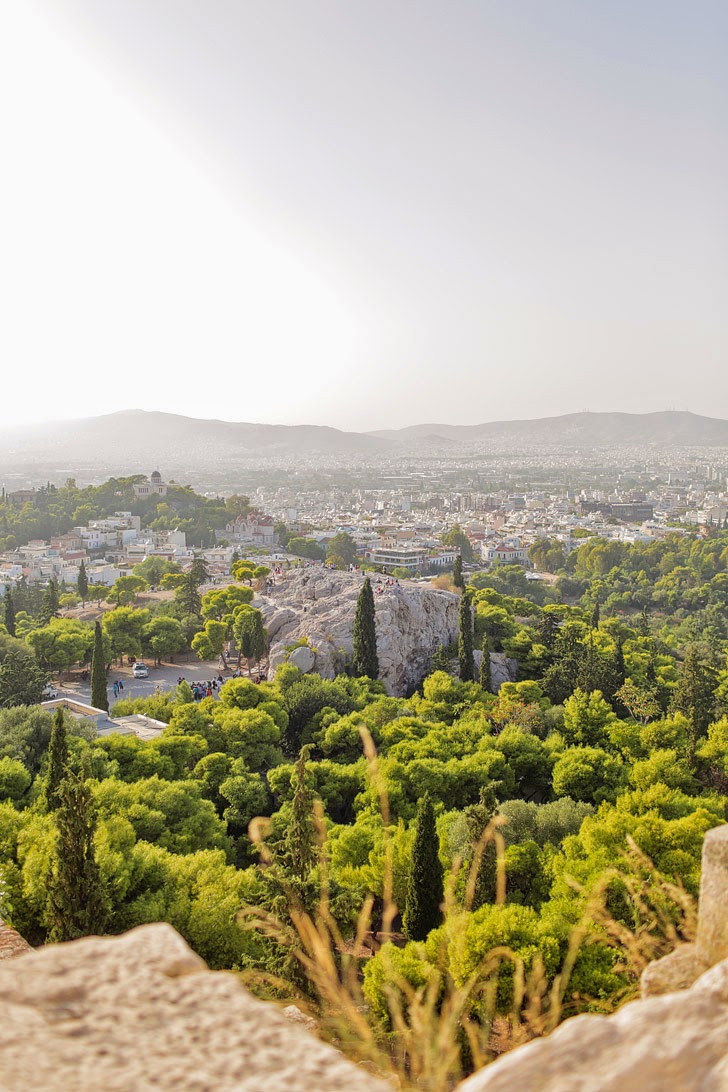 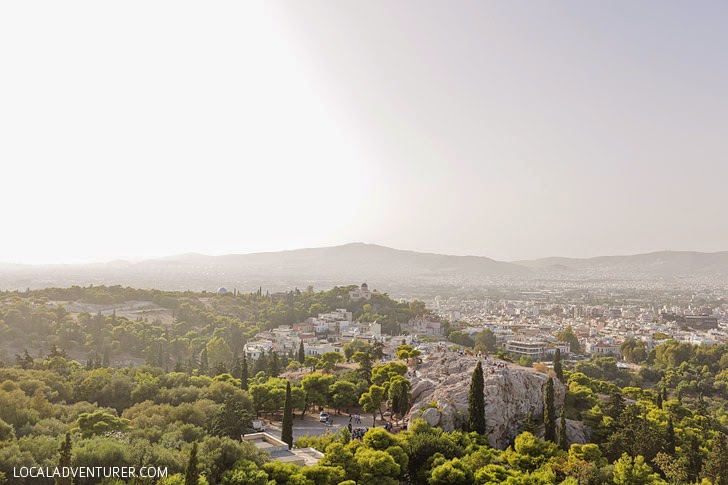 This is the view of Acropolis at night taken from the hill shown in the photo above. 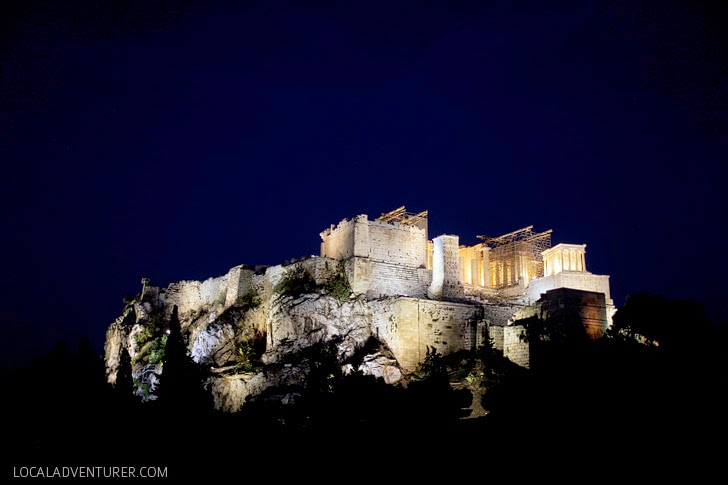 When you travel, what are your favorite sites to see?
Have you been or is the Acropolis of Athens on your bucket list?