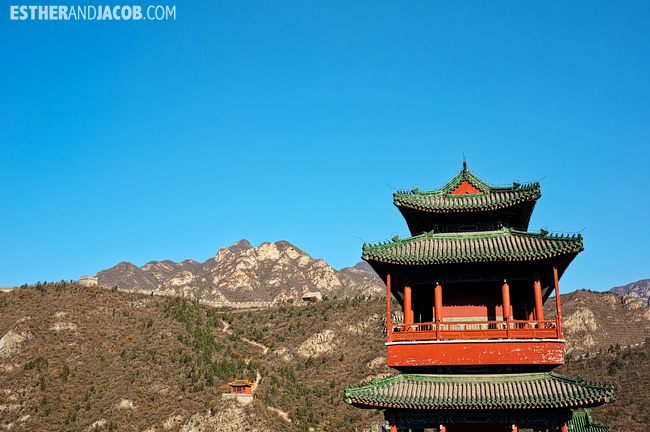 One of the few things in China that we had to see was The Great Wall of China. Afterall, the greatwall is one of the seven wonders of the world. Our tour guide took us to the Juyong Pass which was located about 40 miles outside of Beijing (admission tickets were CNY 45 which is roughly 7 USD). It is a renowned pass, but unfortunately, the massive crowds come with it.

The Great Wall is really massive. Even getting to a vantage point was quite the hike. Thinking about the process of building the wall is mind blowing. The majority of the existing wall was reconstructed during the Ming Dynasty and measures 5,500 miles. If you include all of its branches, it’s over 13,000 miles! Apparently someone has hiked the length of it through the rubble and all. That’s insane.

We took lots of stairs that were steep and narrow to reach one of the watchtowers in order to get a glimpse at the wall snaking through the mountain range. It’s an ancient Chinese custom to fasten a lock and throw away the key to symbolize your eternal love: We don’t plan on going back in the near future, but hopefully we will revisit the greatwall sometime in our lifetime!  Next time we go back, we hope to give ourselves more time so that we can hike further away from the tourist locations or visit other parts of the wall. I’ve seen a lot of amazing photos of the wall, and I’d love to capture some of my own.  All photos on this post were taken with a Fujifilm x100.

We do a travel post every tuesday, and you can see the others by clicking on the banner below: