Hi, friends! Today, I’m collaborating with Sophia on this post. I met her while second shooting her wedding back in the day, and we’ve been friends ever since. I’ve always admired how great of a storyteller and writer she is and how much compassion she has for others. On this post, I’m letting her do the writing. I usually enjoy taking the photos most anyhow. ;)

Happy Lunar New Year! It’s the Year of the Fire Monkey. Fire monkeys are known to be ambitious and adventurous, but irritable. If you’re a monkey, though, watch out. Typically the year of your zodiac is known as the most unlucky in the 12 year period.¹

In ancient China, most of the population worked in agriculture, using the moon to tell when was the right time to “plow the fields, sow seeds, nurture the crops, and gather the harvest.” Thus, the lunar calendar was born.² To commemorate Lunar New Year, I’d like to share my trip to visit Esther in Las Vegas last year, when we celebrated thew New Year together.

Bright red lanterns and paper umbrellas welcomed us into the tea lounge, reminiscent of the night sky on the streets of Beijing. A pair of ram horns floated in the air, above a resplendent orchid arrangement.

We would typically choose an authentic hole-in-the-wall over an elegant, 5-course meal restaurant. But to celebrate Esther’s birthday last month, we flew into Las Vegas, and traded in our tees and denim for teas and dresses by visiting the Mandarin Oriental (to check off her Vegas Bucket List). 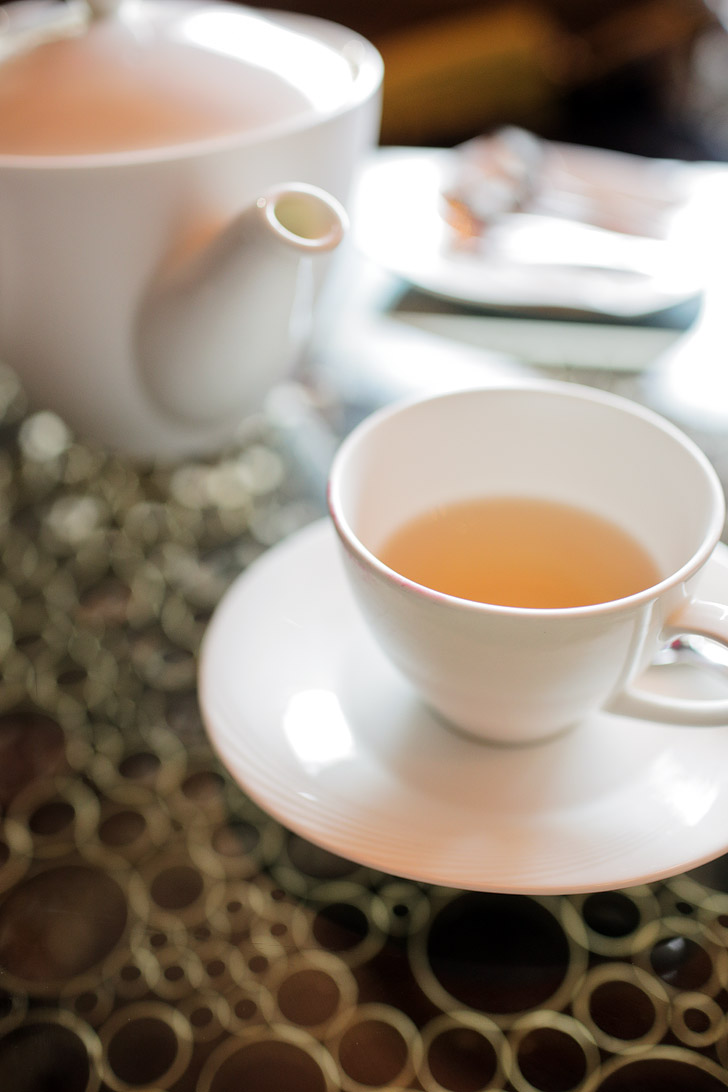 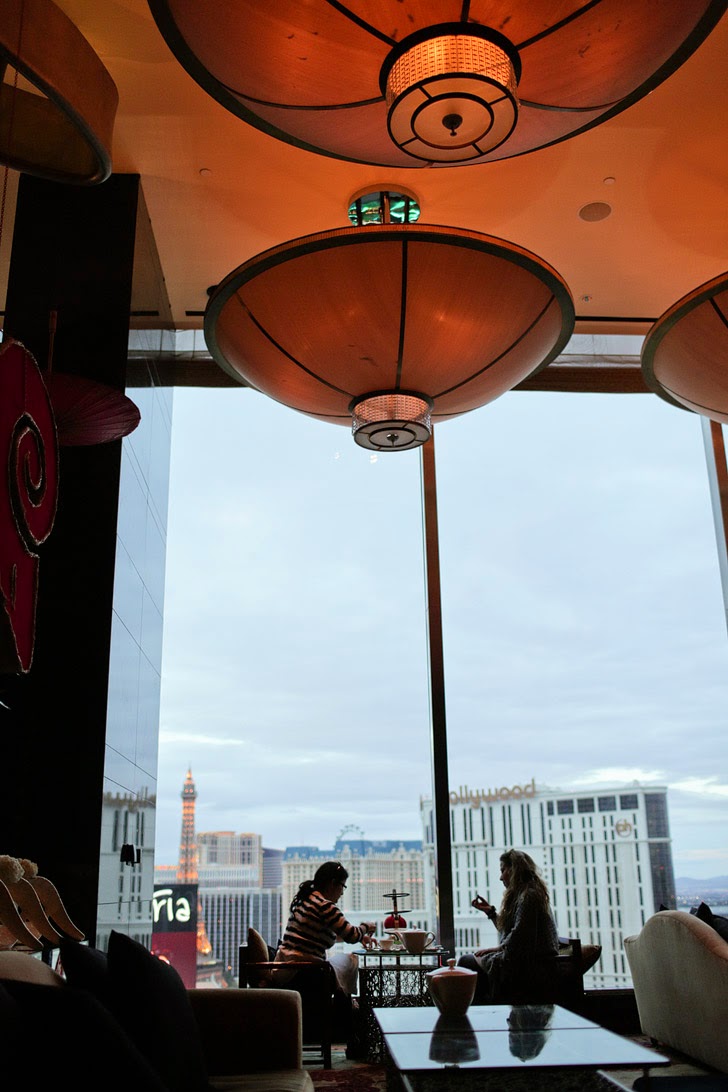 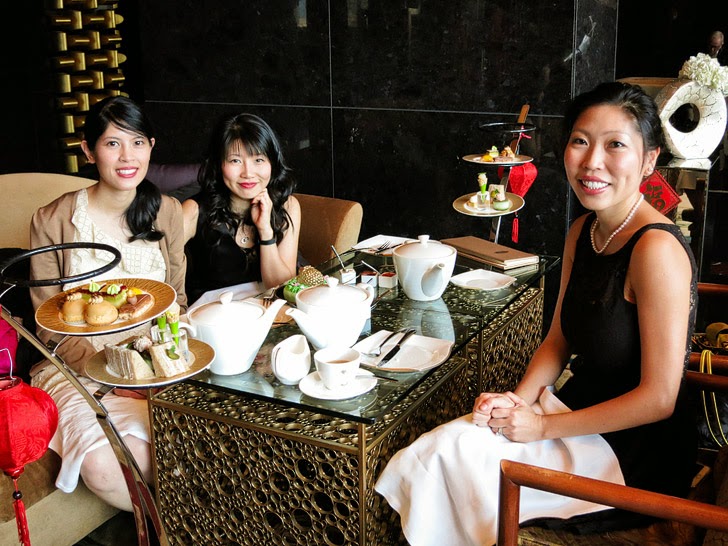 A golden sheep greeted us, encircled by 3 pieces of chocolate. How could I have forgotten? It was Chinese New Year. The Chinese character for sheep, 羊, was painted in gold, atop each piece.

As we nibbled on our chocolates, we shared our Chinese family traditions. Hsiao’s family always enjoyed noodles, 长寿面, symbolizing longevity and fish. “The word for fish (鱼) sounds like the word for abundance (余), both pronounced yu.” In my family, my mom always cooked jai (罗汉斋), a vegetarian dish. “The ingredients are seen as symbols of good luck, such as fat choy, a black, vermicelli-like vegetable that is actually a bacteria, which sounds like the word for prosper in Cantonese, also fat choy.”¹³ 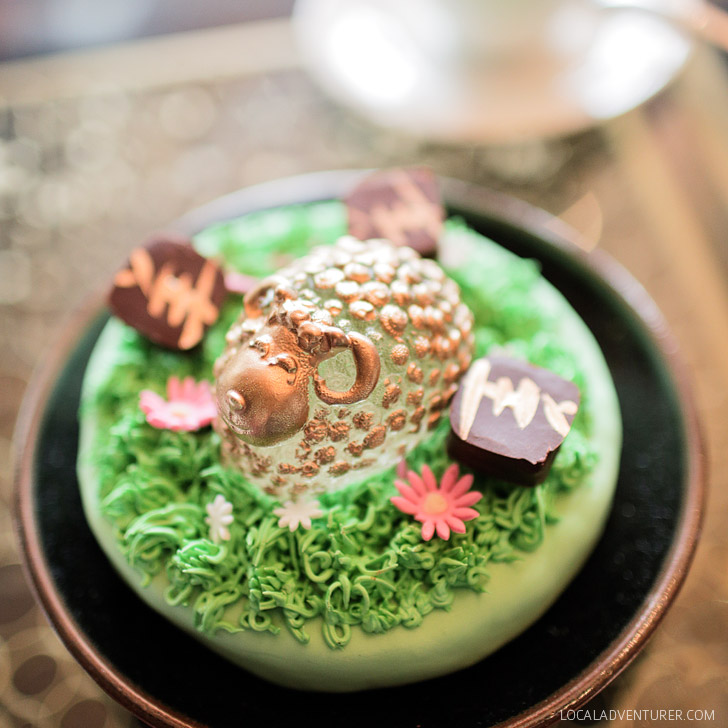 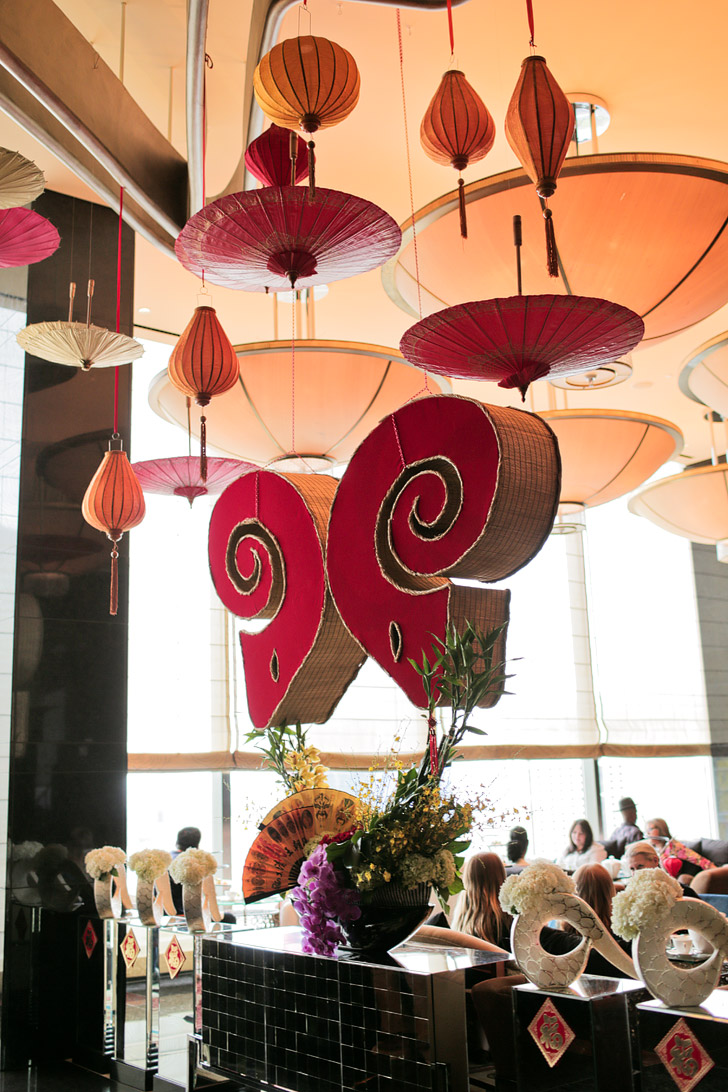 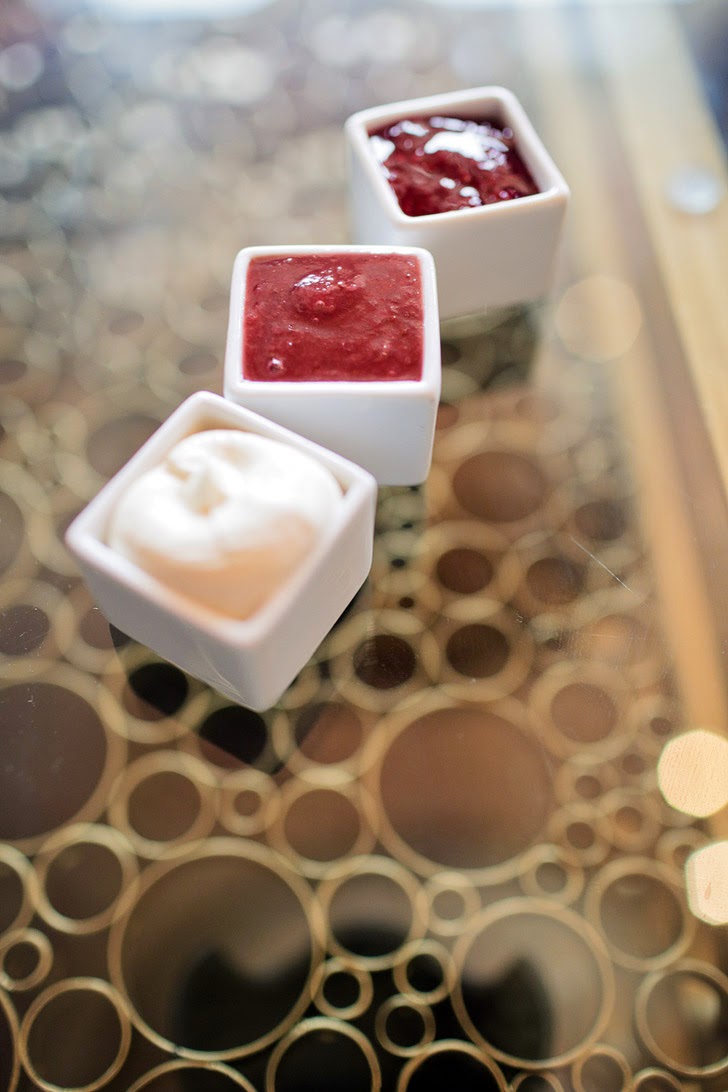 Then three, large, ceramic teapots arrived, each filled with a different type of tea.

Hsiao chose the Mandarin Orange Blend, a black tea, and blended it the way the British do, with milk. The tea was less bold than I expected, but had a pleasant orange taste.

For myself, I chose Osmanthus Oolong. Usually I drink 铁观音 (Ti Kuan Yin) which has a very earthy tone. As with other oolongs, it had a rich flavor, but the osmanthus flowers gave a fruity aftertaste. It was tranquility from a Taiwanese mountaintop, in my cup. 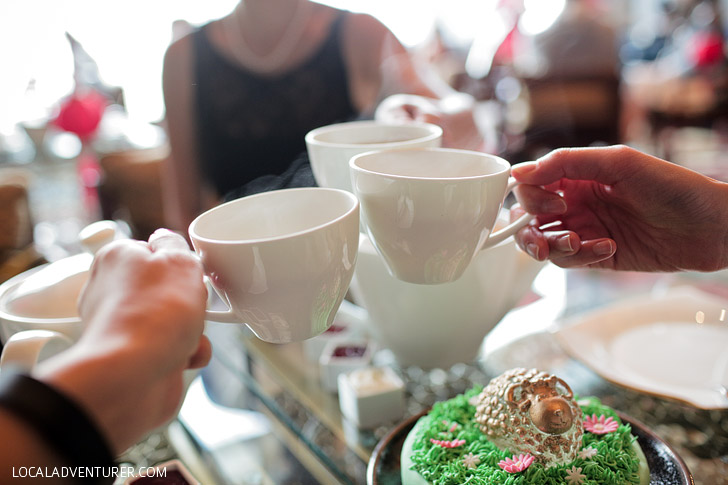 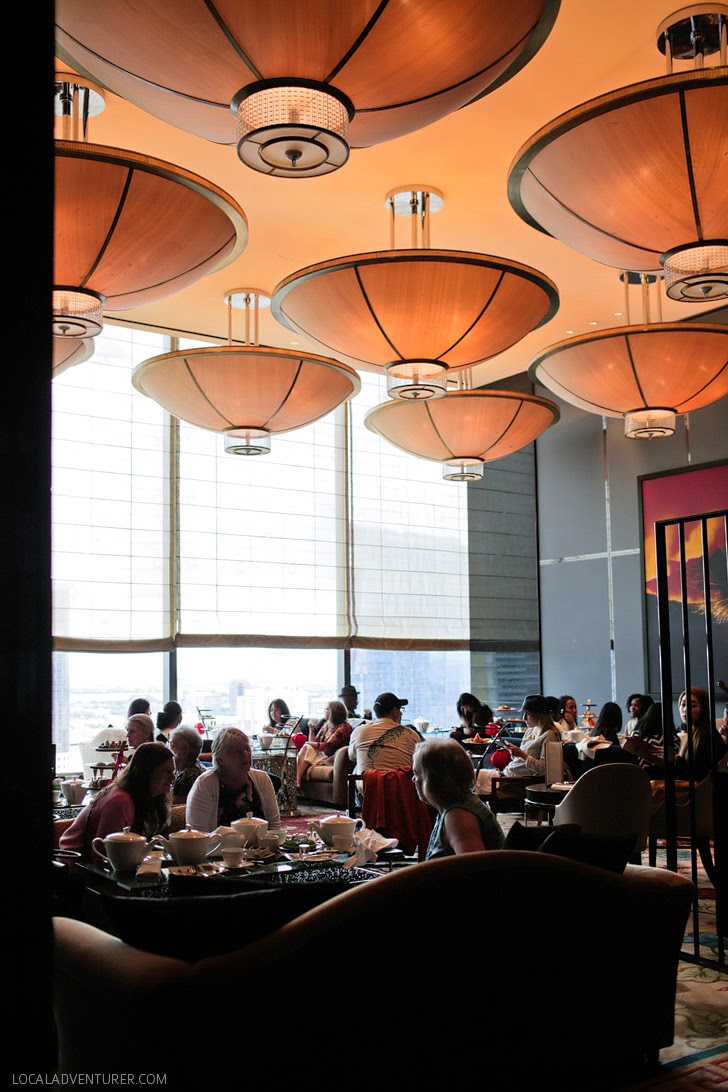 We sipped our tea alongside an assortment of scones, sandwiches, and pastries. “It tastes just like scones in London,” Hsiao smiled, biting into a freshly baked scone with imported Devonshire clotted cream and jam.

Some of the dishes were less British, and more Asian, boasting of complex flavors and textures. Inside a mini crunchy cone, a smooth Singaporean curry paste was topped with a scoop of crisp Asian pear. 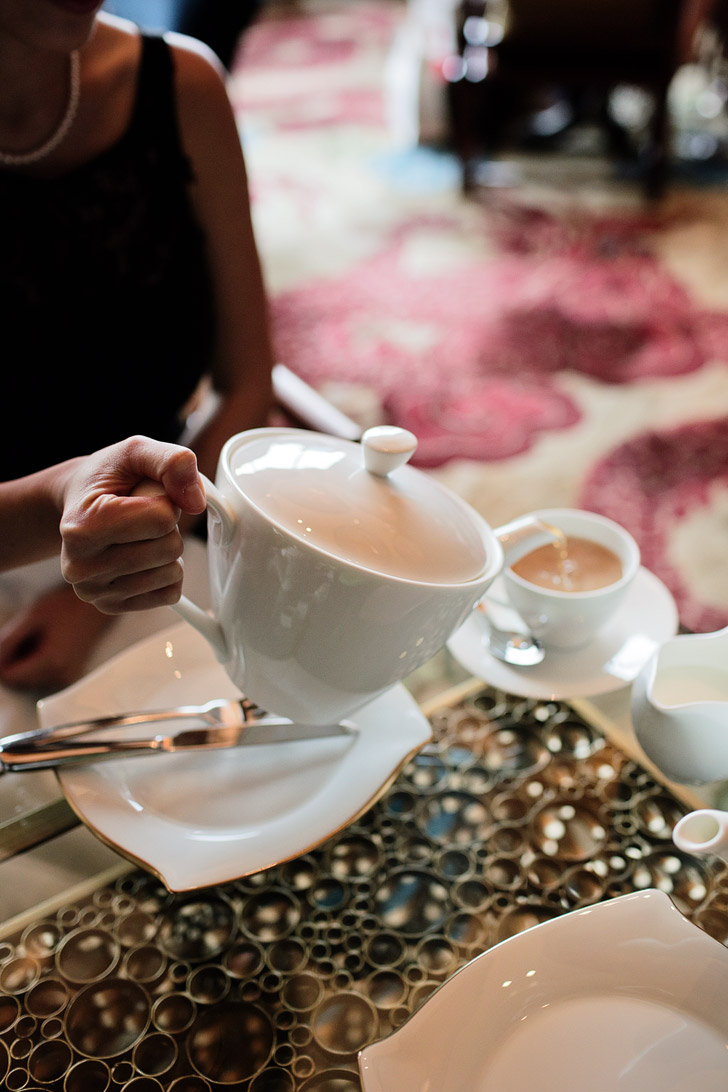 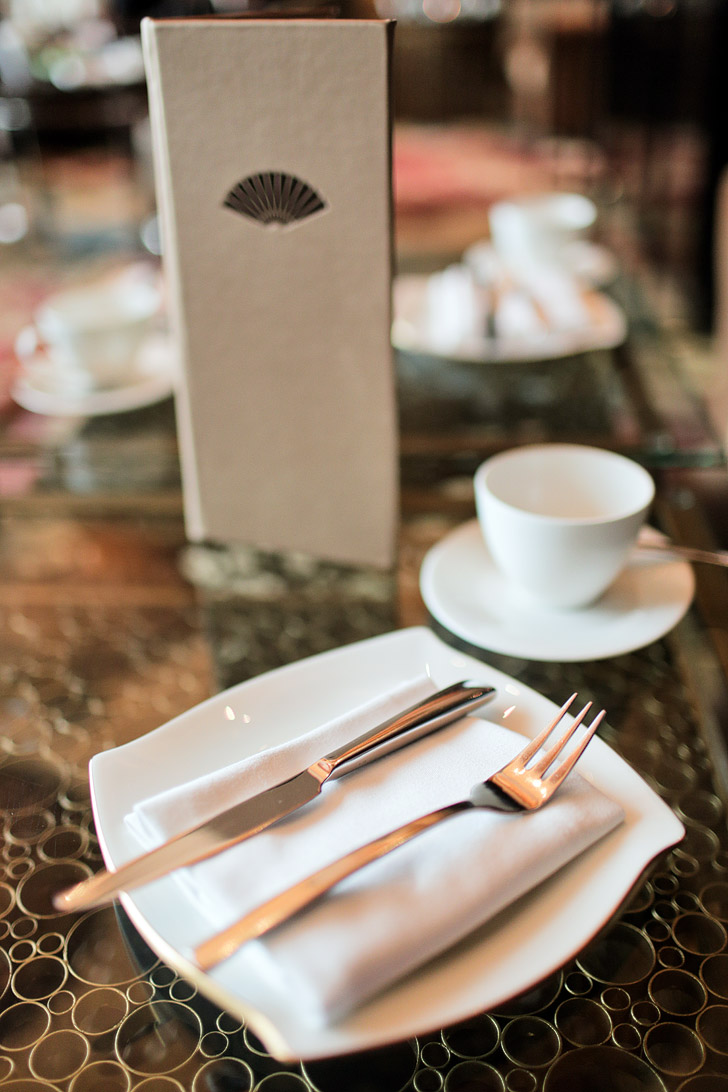 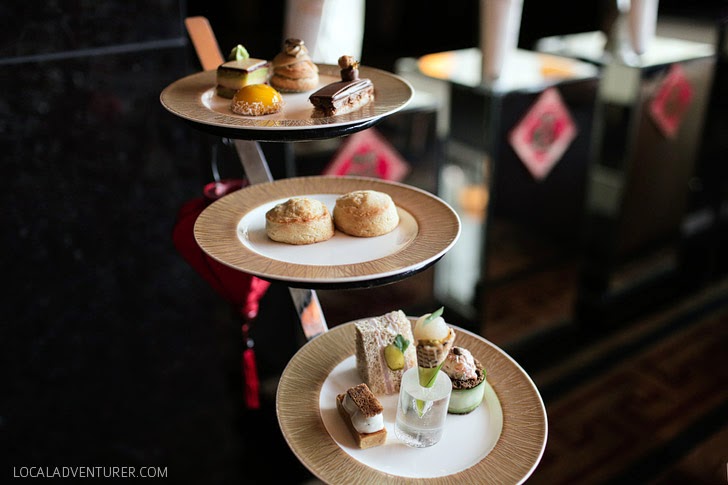 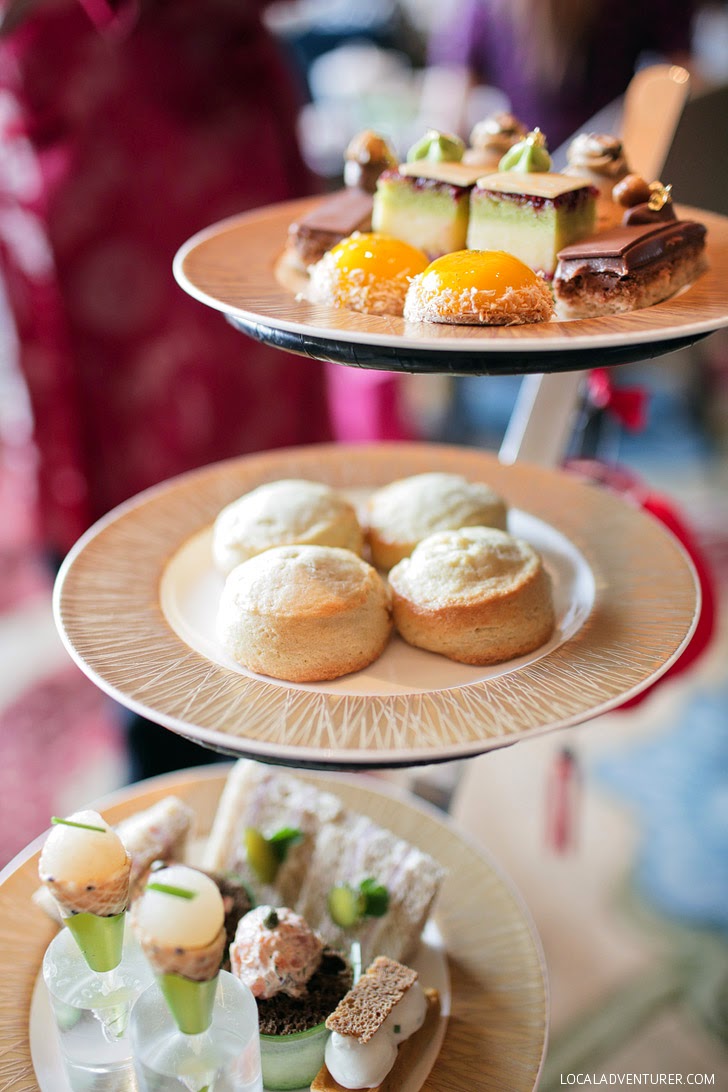 During our meal, Hsiao mentioned her nervousness over an upcoming exam.

“Can you chew gum? It increases brain flow,” Esther suggested.

“Or drink tea?” When I was in school, I used to drink honey green tea while studying or rotating through the hospital. Now, regardless of where I am, when I drink the same tea, I have flashbacks of all my school memories.”

“But did it help you in class?” Esther prodded.

“Probably not, but we should find these teas for you anyway, Hsiao!” We laughed, and her nervousness eased.

Since our families all lived far away, it was a delightful afternoon celebrating the Lunar New Year with my sisters in Christ, and sharing and carrying our burdens for one another.

We finished our tea, sipped until each teapot was empty. Our souls full of sweetness, our bellies full of gratitude.

Soapie is a nurse who grapples with life, death, and humanity. Journey along with her as she blogs at Searching for Substance. Go check out a post we worked on together here.

Have you ever tried afternoon tea?
What’s your favorite kind of tea and where did you get it from?