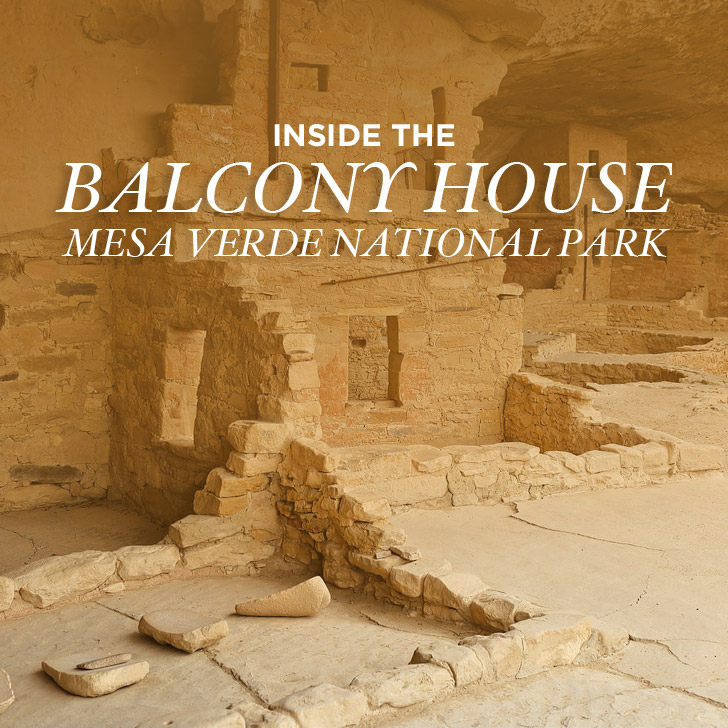 The highlight of our visit to Mesa Verde National Park was taking a tour of the Balcony House! Since we arrived at the visitor center late morning, most of the tours had already filled up that day, so we decided to get tickets for the next morning.

Before the tour, the ranger gave us a safety briefing. He mentioned that if anyone feels they can’t do it due to physical limitations or are afraid of heights, stay at the top. Balcony House is considered a medium size cliff dwelling. There are 40 rooms and only 10 sites in the park have more than that. The 32-foot entrance ladder makes it the most adventurous cliff dwelling tour, and even though we’re scared of heights, it wasn’t bad at all. As we descended down the cliff, we stopped at a few points where he talked more about the Ancestral Puebloans and background of the cliff dwellings. Did you know that we still don’t have a definitive answer on why they lived this way? At a certain point in history they built these beautiful dwellings. Then one day, they just up and left. My favorite feature was the exit. They built a tunnel into one of their entrances as a natural defense! After all, it’s easier to kill any intruders one-by-one. QUICK RANT: See this lady with the neck brace? Yes, it sucks that she’s injured, but it’s still completely disrespectful to touch and lean on these ancient ruins. At one point, we saw her with her knee on it too. Part of me didn’t want to disrupt the ranger giving the talk (no one else in the group noticed her except us), and lets be honest, part of me was too shy to say anything. Thinking back on it, though, I’m disappointed at myself that I didn’t tell her to get off. When the ranger clearly tells you before the tour if you can’t hike, climb, and stand for an hour, you shouldn’t come. It was truly amazing to stand in and see the Balcony House. We’ll have to make our way back to Mesa Verde National Park again to tour the other dwellings too!

PRO TIPS FOR THE BALCONY HOUSE + OTHER MESA VERDE TOURS

What ruins have you visited? Would you have confronted the lady?