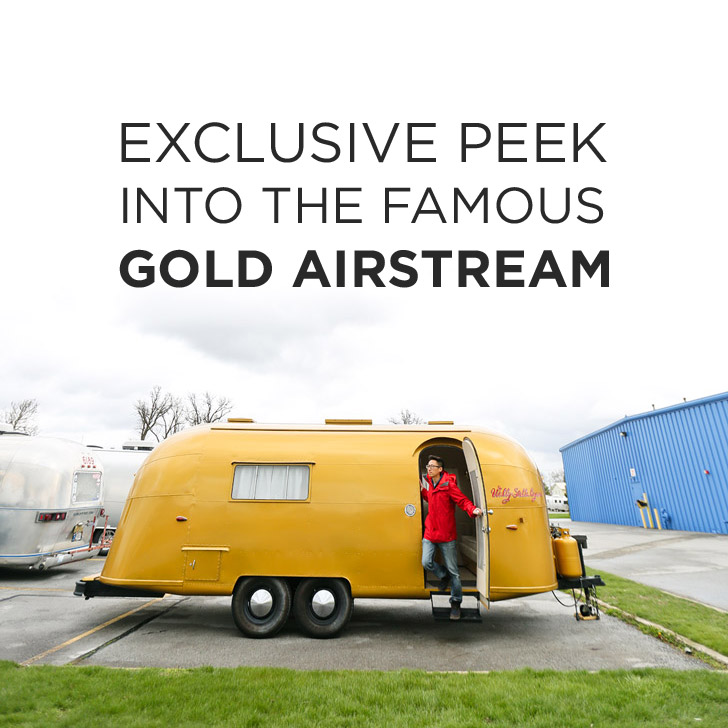 We had a minor hiccup, which delayed our trip a week, which meant we could get a week ahead on blog posts and explore more of Airstream HQ (Yay for one more week of internet!). We took the Factory tour. It’s free and you should absolutely take it if you ever find yourself in Jackson Center, Ohio. And we also got a chance to peek inside Stella’s famous gold trailer.

Airstream’s founder, Wally Byam, started designing a new trailer for his wife Stella during his 1956 Airstream Wally Byam European Caravan. Everything about it had purpose and beauty, and it will be forever known as “Stella’s Gold Airstream.” The gold airstream also stood out and made it the perfect lead caravan for their Cape Town to Cairo Africa Caravan in 1959-60. Wally and Stella each had different sleeping habits. Wally would sleep short periods and wake up often while Stella preferred to sleep in. As a result, they built two separate sleeping spaces so that she could have a partitioned area to allow her to hide away.

Can I get a partitioned area? Jacob snores…. Over the years, the Gold Airstream was sold and passed amongst multiple owners until it was repurchased by Airstream in 1992. Two long-time employees worked to disassemble and restore the trailer to its original glory, which was finished in 1996.

Stella’s Gold Airstream turned out to be Wally’s most famous trailer and his last one. You can still see the exterior during the tour at the Airstream Headquarters in Jackson Center, OH, but during the summer months, they may even leave the door open for you to peek inside. If you could have any color airstream, what color would you pick? How would you customize yours?

Mine might be rainbow because I won’t know how to decide. haha

A huge thank you to Airstream for powering our grand adventure and making this dream of ours a reality.
As always, all opinions, text, and images are our own unless otherwise specified.
If you’re an Airstreamer / on the road, don’t forget to share your photos and tag #endlesscaravan. Let’s go!