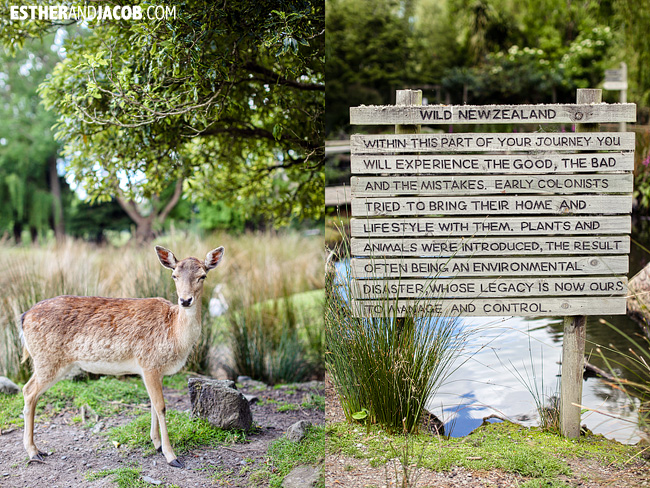 On our second day in Christchurch, we headed over to Willowbank Wildlife Reserve in search of the infamous Kiwi! These were the Big 5 in New Zealand that were featured at Willowbank: the Takahe, Kea, Tuatara, Kiwi, Kaka.

Out of the five, we only ended up seeing the Kea and the Tuatara.  We found out that Kiwis are nocturnal, so we did see them but only as balls of fur sleeping from a distance. We especially wanted to see the Takahe, but they were nowhere to be seen in the exhibit.  The Takahe is a large flightless bird that was thought to be extinct but later rediscovered. Don’t step in the duck weed.. Looks like solid ground, but it’s all water underneath. The ducks and black swans aren’t part of the reserve but coexist with the animals there. The Tuatara: They are a living dinosaur and have not changed for 220 million years. On the left is the giant moa that’s now extinct & reminds me of the bird in Up!  On the right is the Kea. They have beautiful coloring under their wings, but we didn’t see any in flight. Although we didn’t see everything, we had a great time! There were a lot of animals we had never seen before in our local zoos. An Overview and Tips for Willowbank: