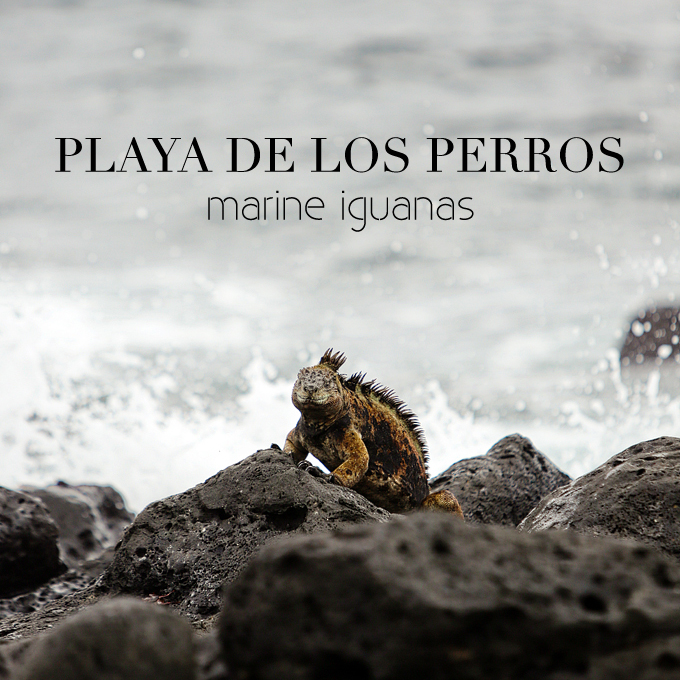 On the way to Playa de Los Perros to see the Galapagos marine iguana, we passed by the Canal de las Tintoreras (literally translated as canal of sharks) to view some white tip sharks. The marine iguanas are a unique species only found in the Galapagos Islands. They are the only ones that live and feed in the sea and can dive over 30 ft (9 m) into the water. At Playa de Los Perros, we saw them napping on the lava rocks. They are generally black and dark grey in color to soak up the sun, but change depending on the season. Because we happened to see them during breeding season, the males had patches of coppery greens and reds. The more dominate males are more popular with the ladies, and males sometimes fight over territory.

They are known to be gentle herbivores that eat only algae and seaweed, but we were both too intimidated to get really close to them.  I feel like any animal who feels threatened might attack… though I couldn’t find any cases of humans being attacked by them. They pretty much just stand their ground. We were lucky enough to see two males fight! Don’t worry. The fights are usually harmless. They butt heads until one concedes. The one we saw lasted only a few minutes, but you can see a more intense one here. Do these guys freak you out? Would you ever consider having a pet iguana?

You can see a video montage of our Galapagos trip, or check out my other Galapagos posts by clicking on the banner below: