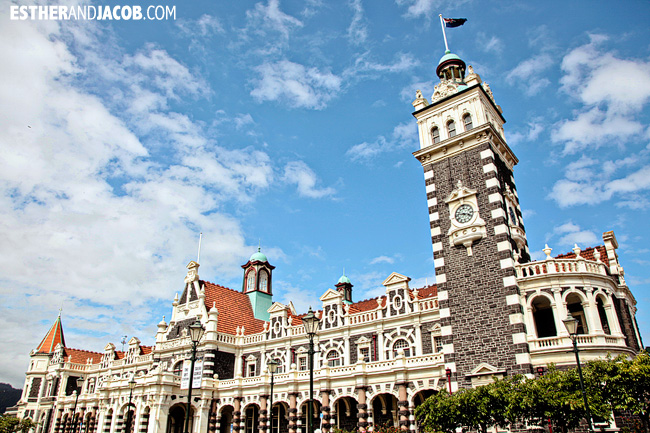 On the second day of our contiki tour, we started our way to Dunedin and made several stops along the way. Benmore Dam was first. Apparently 25% of electricity in New Zealand is through hydro electricity. Next, we stopped in Oamaru – home to the Steampunk Museum, which we didn’t end up going inside.   Instead, we went to Short Black, ordered a drink, and used their free wifi.  Priorities, right?  Shortly after, we went to Moeraki to see the Moeraki Boulders and eat the fish n chips at the restaurant there. Once we got into Dunedin, the first place we headed was Baldwin Street.  It’s the street that holds the guinness record for the world’s steepest street and a great work out. We dropped our bags off at our hotel, The LivingSpace.  Each room was compact, clean, and very efficient.  I wouldn’t mind staying there again.  I was intrigued by the shoes hanging on the tree of the house next to the hotel, so I snapped a photo of it. Turns out it was formerly the house Nek Minute who was referenced several times throughout the tour. Then we headed out to explore the city of Dunedin.  This is the Dunedin Railway Station.  It’s known to be one out of 100 buildings to photograph in the world.  I had no idea such a list existed, but I like lists and crossing things off… so here goes… 1/100! We ran into these cuties along the way. We spent the majority of our time in the main area with restaurants & shops called the Octagon. And ended the night with The Speight’s Brewery Heritage Tour.  Speight’s is one of the largest local breweries in New Zealand.  We got to learn about the history, how they brew the beer, and “taste” many of their popular beers.  I can be a beer snob, but I was pretty impressed by their porter. Not bad, New Zealand, not bad! Timeline of our day:

Optional Activities for next time we’re in Dunedin: